Israeli rabbi wants millions to build community with no Jews

An Israeli rabbi is claiming to be Chief Rabbi of a non-existent community and is demanding $10 million to build a mega-synagogue for them.

Israeli Rabbi Daniel Edri, who headed the Haifa Beth Din and has no Kurdish roots, has produced a letter from the Kurdish Ministry of Religious Affairs nominating him as the Chief Rabbi of Kurdistan. But the Ministry itself has claimed that the letter is a forgery. 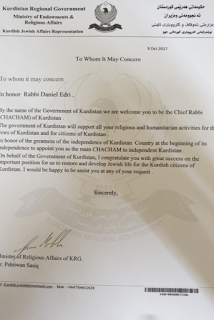 This month, the rabbi claims to have been in touch with an old Jew in Baghdad called Daoud Benattar who told him that there were ''close to 100 Jews in Baghdad'. Benattar is not known to anyone who is familiar with the few Jews still in Iraq. According to Edwin Shuker, who visits Iraq regularly, there are only four Jews still living there.

Likewise, there are no Jews in Kurdistan, although some Kurds claim distant Jewish ancestry.  The entire community -  some 18,000 Jews -  was airlifted to Israel in 1950.

A non-Jew called  Sherzad Mahmoud Mansani was exposed as an imposter after the Kurdistan Regional government sacked him as head of the Directorate of Jewish Affairs and exiled him. Mamsani's objective was to raise funds from the Jewish diaspora in order to 'rebuild' the Kurdish Jewish community.

Rabbi Edri was first introduced to Sherzad Mamsani in 2017 and has admitted knowing that he was not a Jew.  He is now believed to be working with  one of Sherzad's acolytes,  Ranjar Cohen. Rabbi Edri has been quoted as saying, 'Sherzad is out of Kurdistan so we are going ahead without him.'

Despite his name, Cohen is not a Jew either. After failing to  register a synagogue with the Ministry of Religious Affairs,  Ranjar Cohen  registered a non-profit humanitarian organisation named Aramaic Organisation which he promoted as a Jewish congregation. After the imposters were denied entry to the shrine of the Prophet Nahum, they organized a Hanucah ceremony at a hotel instead. 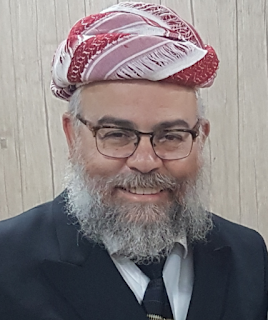 Rabbi Edri 'supervised' the  Hanucah menorah lighting ceremony in December 2020. Of  the two founders of the Aramaic Organisation  one is now in jail, convicted of murder.

It is suspicious that in order to achieve his objective of reviving the Kurdish Jewish community, Rabbi Edri seems to have avoided working with the late Dr Moti Zaken, the leading authority on Jews of Kurdistan, who spoke out against any abuses. Rabbi Edri has preferred to use his own dubious Kurdish contacts. In order to minister to the phantom community he purportedly heads, Rabbi Edri would have to register Muslims as Jews.

It appears that the death of Dr Zaken  may have left a vacuum which imposters and fraudsters can freely fill.