Some five years ago, the Jewish press began reporting on the activities of Sherzad Mamsani, who claimed to represent some 450 'Jewish' families in Kurdistan when all had been airlifted to Israel in 1950.  Point of No Return has always had its suspicions about Sherzad Mamsani's 'Jewish' identity. Now Times of Israel blogger Levi Clancy has exposed Mamsani as one of three imposters, who saw that there was money and influence to be gained if they posed as Jews. The one area Clancy does not investigate  is whether Mamsani was an Iranian agent, and  any part he might have played in the abduction of Mawlud Afand, the editor of the Israel-Kurd magazine in 2012. 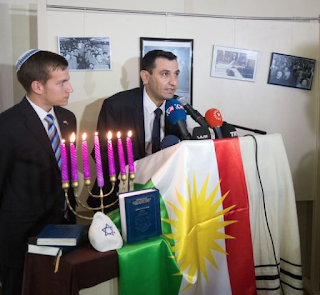 For several years, the Kurdish Jewish leadership in Israel has tried to build constructively on their historic ties with the Kurdistan Region, but has been obstructed by a small group of impostors who rightly saw the actual Kurdish Jews as a challenge to their scheme. The impostors were led by publicity-seeking figures such as Sherzad Omar Mahmoud and Ranjdar Abdulrahman (under the aliases “Sherzad Mamsani” and “Ranj Cohen”), as well as Sherko Othman. These men pleaded in the media for visa cards and visa stamps — for themselves and their clients — under the false pretense of being forgotten and dispossessed Jews.
The National Association’s press statement on this issue is available here.
The fabricated Jewish past of Sherzad Omar Mahmoud, a.k.a. “Sherzad Mamsani”: Sherzad insisted that he was born Jewish, but at different times claimed three entirely different backstories: in one version, he had Jewish parents who raised the family as Jews; in another, he had Jewish parents who raised the family as Muslims; and in yet another, he had two Muslim parents, but with unsubstantiated Jewish ancestry on his mother’s side.
“My two grandmothers were Jews,” stated Sherzad in an interview where he explained that both of his parents were Jewish. “We celebrated Jewish holidays very secretly” and “never learned about Islam at home” explained Sherzad in another interview. However, his level of knowledge indicated otherwise. “Clearly his first,” remarked an unimpressed Rabbi about a religious dinner attended by Sherzad overseas.
“Hanukah is the Jewish New Year,” explained Sherzad incorrectly in a television interview. But at other times, Sherzad stated that his whole family “lived as Muslims” — and on this, there seemed to be some agreement. Sherzad’s brother Azad clarified that Sherzad came “from a family of Muslims” and offered photos of the family observing Ramadan, and doing the Hajj pilgrimage to Mecca.
Sherzad weakly suggested in a report that his father and brothers became Hajjis as a ruse and that they secretly were observant Jews.
Levi Clancy's three-part series is here, here and here
Posted by bataween at Monday, January 18, 2021