Tunisians serve up Merguez with everything before 9th Av

Tonight begins the longest fast of the Jewish year, Tisha b'Ab (9th of Av), in memory of the destruction of the two Jewish Temples in Jerusalem. Writing in Harissa, Victor Hayoun reminisces about the customs specific to Tunisian Jewry. To make up for the ban on eating meat in the run-up to the 9th of Av, Jews ate a surfeit of Merguez, the spicy sausage typical of North Africa. 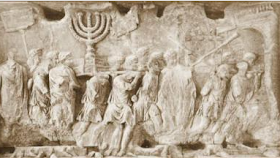 We commonly called this period, in Tunisian Judeo-Arabic, "Agein"  or "Ayamet-El-Tkal" [literally: "heavy days"], these were the expressions used by our parents to talk about it. These days were heavy with fear and prohibitions.

We knew it was in memory of a serious event, even of mourning, since we did not eat meat. These are austere days, full of restraint, no festivities, no excess of joy, no cutting your hair, no buying new clothes or anything else new, no undertaking new projects or signing new contracts, no starting to new approaches. In fact, we stopped making progress, we treaded water. It was our way of mourning the destruction of the two Temples in Jerusalem.
That was not all, there were also the dietary restrictions. We did not eat meat or chicken, except on Shabbat. We were entitled to fish in all its forms: fresh, canned: tuna / sardines / anchovies, dried fish (Bou-Zmeimar) and boutargue (for wealthy people who could pay the price). It was fried in whole fish, cooked in a spicy sauce: H'raiimé, or cooked in a vegetable broth: fish couscous accompanied by fish balls, fried and cooked. We had a great choice. A whole series of possibilities of consumption of fish to "fill" the absence of meat and chicken.
But the Tunisian Jew is all the same a pleasure-lover. He does everything to have fun in all circumstances and also and especially at the table. No prohibition can resist him. If he has found a way to consume rice on Passover, 'it is really nothing for him to consume meat, or any derivative, during the days leading up to the fast of Ninth of Av, becomes a heavy consumer of Merguez (spicy sausage) during these first eight days of the month of Av (not Shabbat of course). In our childhood, our mother, peace be on her soul, prepared us Merguez before the month of Av, she dried them on a clothesline and then she prepared us Shakshouka with Merguez, Mloukhia with Merguez, beans "Bsal-ou-Loubia" with Merguez and many other dishes cooked with Merguez.
To these dishes of fish and dried meat, We added"Falsou" dishes."Falso" in Italian which means "false". These are in fact the "fake" dishes that we called so because the "real" ones were with meat, chicken or fish. In fact, these dishes which did not contain any, were equally delicious dishes such as pasta, cooked vegetables, couscous, or more rarely rice.
Read article in full (French)
More about Tisha b'Ab
bataween at Sunday, July 18, 2021
Share