Iraqi man in pro-Israel video beaten up and hospitalised

It was one of the most eye-popping videos to surface from the Arab world: an Iraqi man calling for Benjamin Netanyahu to save him and bring him to Israel.
The video, which seemed to  attract  the approval of bystanders,  was hailed by Israeli talk show host Avi Abelow as running contrary to the predominant narrative: that Arabs are instinctively hostile to Israel.
But delight amongst Jewish viewers turned to horror as these pictures began to emerge. They show that that the man was badly beaten and is now being treated in hospital.
According to  Israeli Arabic-media monitor Linda Menuhin, the man made his outburst following the fire that killed  92 in a hospital in Nasiriya. Iranian-supported militias were responsible for almost beating him to death, she claims. 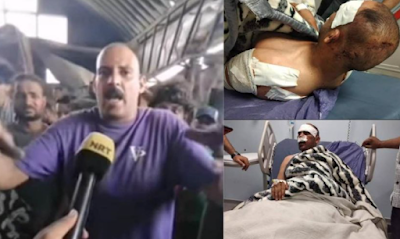 Simply to fly the Israeli flag earns an Iraqi three years in prison. Which goes to show how brave - or desperate - this man was, to speak out in favour of Israel.
bataween at Monday, July 19, 2021
Share