Art lover and founder of Israel's i24 News, Patrick Drahi is now the biggest shareholder in the British Telecoms company, BT. The Guardian profiles the Moroccan-born billionaire: 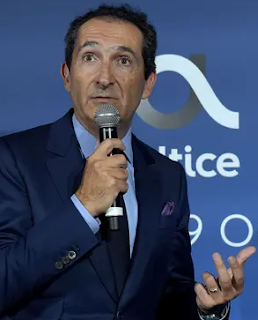 Patrick Drahi
Born in Casablanca, Morocco, in 1963 to two maths teachers, Drahi moved to France as a teenager and holds Israeli, French and Portuguese citizenships.
He lives in Switzerland, where he has homes in Geneva and the ski resort of Zermatt. Drahi attended the École Polytechnique in Paris, the French university famed for turning out the country’s most successful business leaders and politicians.
After working for a number of cable and satellite TV companies he co-founded two of his own in the south of France in the mid-1990s.
Read article in full
bataween at Monday, June 21, 2021
Share