The debate rages on: did Jews experience a Golden Age in al-Andalus, in medieval Islamic Spain? Professor Mark R. Cohen of Princeton wrote an interesting prologue to the Encyclopedia of Jewish- Muslim relations published in 2014, admitting that it was to a certain extent a myth. 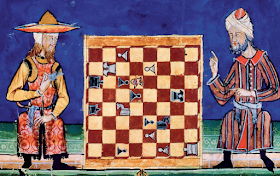 This image of a Jew playing a game with a Muslim  is often used to illustrate the Golden Age of al-Andalus.

It is true, he writes, that Jews were immersed in Arabic-Islamic culture  - language, poetry, science, medicine, philosophy. True, Jews became powerful advisers to Muslim rulers. True, Jews were not generally  confined to certain occupations as they were in Europe, and the idea of usury did not have the same stigma.

The Jewish intellectuals in 19th century Germany, alienated by the rise of antisemitism and unfulfilled promises of emancipation, idealised the situation of medieval Jews. They tended to ignore the Jews' legal inferiority, or dhimmi status. Yet the 'lachrymose' version of this history exaggerates the negative. The myth of the Golden Age, Cohen argues, contains a very large kernel of truth.

Yet, for over 100 years, Muslim fundamentalists, in the shape of the Amohads and Almoravid Berbers, compelled Jews to choose between conversion to Islam or death. Cohen argues that Jews could always 'pretend' to convert, as Maimonides did - so this was a mitigating factor. But he could not deny that Christianity was wiped out altogether in North Africa and the Jewish population dwindled dramatically.

It has also been argued that pogroms against Jews were unnecessary when Jews were already cowed and submissive. On the other hand, Cohen argues that the dhimmi rules were often breached in Muslim Spain. What he does not say is that while rulers were ready to breach those rules in order to promote useful and talented Jews to positions of power and influence, the masses did not take kindly to Jews behaving above their station - hence, for example,  the massacre of 3,000 Jews in 1066 when the mob was outraged at the actions of the 'haughty' Vizir Joseph Ibn Naghrela.

Cohen argues that persecution of Jews could not have been as bad as in Christendom. The proof was that they did not chronicle their persecution as Jews did in Europe. But the essence of being a 'dhimmi' was surely NOT to harp on these episodes of persecution in order not to antagonise their rulers.