In honour of United Nations World Refugee Day today, Israel and Jewish organizations remembered the often forgotten story of the nearly one million Jews who were ethnically cleansed from Arab and Muslim countries over the past century. The Algemeiner reports:

Most were absorbed by Israel. The Jewish state issued a video chronicling the history of those refugees, their journey to Israel, and their absorption.
The Canadian branch of the Jewish rights group B’nai Brith tweeted, “On World Refugee Day we remember the nearly 1 million Jewish refugees who fled Arab Countries and Iran to resettle in the only safe haven for them, Israel, and which made Israel the largest refugee camp in the Middle East.” 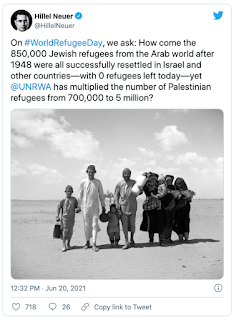 Hillel Neuer of the NGO UN Watch asked a pointed question about the UN’s double standard on Palestinian refugees, saying, “On World Refugee Day, we ask: How come the 850,000 Jewish refugees from the Arab world after 1948 were all successfully resettled in Israel and other countries—with 0 refugees left today—yet UNRWA has multiplied the number of Palestinian refugees from 700,000 to 5 million?”
Read article in full
bataween at Sunday, June 20, 2021
Share