Antisemitism is threatening to penetrate deep  into the heart of Africa as the Congo contemplates disqualifying presidential hopeful Moise Katumbi for having a Sephardi father from Rhodes. JTA report in Times of Israel (With thanks: Nancy) 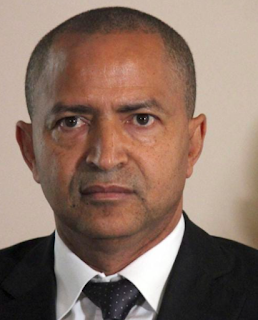 Moise Katumbi, successful businessman and presidential challenger. JTA — The ancestry of the son of a Jewish refugee in the Democratic Republic of Congo has emerged as a flashpoint for a political crisis that is threatening the integrity of the massive African country.
The crisis came to a head last week when lawmakers loyal to President Felix Tshiseked introduced a bill that would restrict the presidency to those with two Congolese parents.
It’s a thinly veiled move against Moise Katumbi, one of Congo’s most popular politicians, whose father was a Greek Jew who fled the Holocaust in Europe and settled in Congo, where he married a local woman, Katumbi’s mother.
Read article in full
bataween at Thursday, July 15, 2021
Share