A new book by Professor Efraim Lev focuses on  600 Jewish doctors  who lived in Islamic Spain in the Middle Ages. Review in the Jerusalem Post by Kenneth Collins: (with thanks: Jeremy) 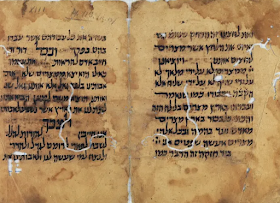 A fragment from the Cairo Geniza
Using Geniza records and fragments along with extant medieval Muslim Arabic sources Lev has been able to present information on the lives of more than 600 Jewish physicians and pharmacists in the Islamic world of the Middle Ages.
He employs the technique of “prosopography,” a study that identifies and relates a group of persons or characters within a particular historical context, to create “a collective biography.” This shows how these practitioners functioned as they cared for Jewish, Christian and Muslim patients in the Islamic world, which stretched from Morocco and Andalusia to Iraq and Iran.
Jewish physicians and pharmacists had mainly good relations with Christian and Muslim colleagues, and medical students of the three faiths learned together in the eastern Muslim lands, often in hospitals and at other times within family networks. Jews were attracted to the medical profession.
Medicine carried prestige and offered opportunity where other scholarly options were closed to them.
These physicians were literate in Arabic and Hebrew and had access to medical libraries. Even during times of restrictions on Jewish doctors, Muslim rulers and the public still consulted them.
This work brought Jewish physicians close to the center of power and some Jewish court physicians were killed in court intrigues.
Read article in full
bataween at Wednesday, June 16, 2021
Share