The Libyan Jew preserving 'la dolce vita' in the kitchen

Meet Hamos Guetta, who fled his native Libya for Italy in 1967. Italy and Italian cooking has had a profound influence on Jews like Guetta as Libya was an Italian colony. It was to teach his daughter his family's cuisine that Guetta first started making cookery videos. Now he has 17,000 followers on Youtube. Charming interview in Haaretz: 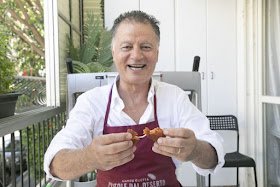 Hamos Guetta demonstrates a recipe (Photo:Tamar Applebaum)
“I was 12 when we arrived in Rome, desperately poor. We went for a walk in Piazza Vittorio, a huge square with a colorful market that rocked my world. I had never seen such produce. It stimulates all your senses at the same time. The colorful abundance of fruit and vegetables, the fresh herbs, the smells, the hustle and bustle of the market. It’s important to stop here and note that we arrived as refugees fleeing Libya after a month of hiding in different houses.
“I was totally shocked by the freedom with which people went about their affairs. In one spot, chickens were being slaughtered right there, and in another, there were stalls of Parmesan cheese that the vendors let me taste. Everyone was drinking wine and enjoying life. That evening, I returned to the square and was enchanted by a beautiful musical performance. I realized that this was la dolce vita Italiana.”
Read article in full
bataween at Tuesday, July 13, 2021
Share