Here is an update  to our post last week on the islamisation of Ezekiel's tomb at al-Kifl in Iraq. The makeover of the shrine by the Shi'a Endowment has been so extensive that a report in Al-Monitor did not even mention its 2,000 years of Jewish history and importance as a centre for Jewish pilgrimage, linking the site back to pre-Islamic times and the worship of the Babylonian sun god.

We have received recent photographs which attest to the current state of the shrine. Point of No Return is very grateful to the photographer, who took great risks. All the photographs are from 2015 and the latest of them date from last month.

There is good news and bad. The good news is that, contrary to fears that they had been erased, the Hebrew inscriptions on the interior appear intact.

Update to the update: Another visitor has sent us the two photos immediately below. They show that a layer of whitewash has been stripped away to reveal the beautiful floral motifs on the walls. Below the Hebrew inscription is a 'cupboard'.  This would have housed Torah scrolls, long since gone. 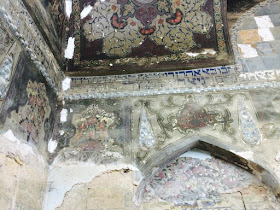 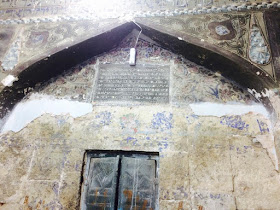 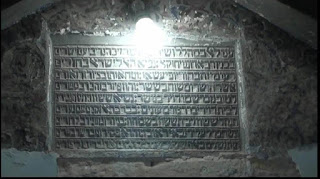 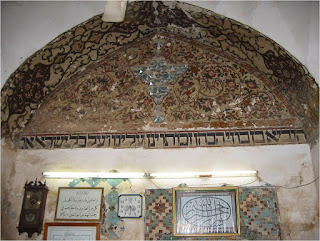 The floral decorations on the wall and ceiling are faded but have not been removed. 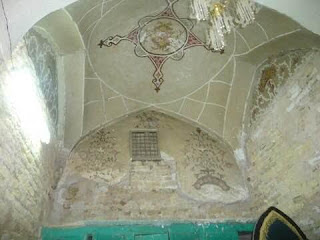 The wooden casing of the tomb bears a green cover inscribed with the name of Dhu al-Kifl, the name of the prophet mentioned in the Koran, whose shrine Muslims believe this to be. 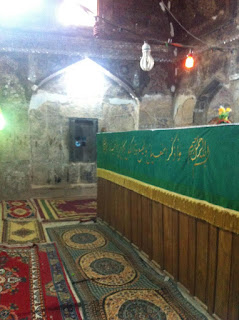 Of concern is the fate of the tombs of the Jewish sages or Geonim buried within the shrine's precincts. The renovation work is still not finished but the intention appears to be to conceal them with a marble floor slab. 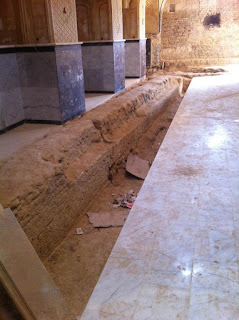 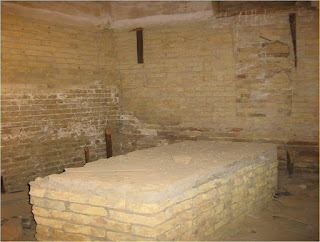 Photo taken in 2004 shows a Jewish sage's tomb (photo: MS); the tombs seem to have been concealed beneath a new marble floor

The exterior courtyard has been totally renovated in traditional Shi'a style, with grand gateways, colonnaded walkways, geometric friezes and carvings and the addition of elaborately-decorated quba domes, some bearing Koranic inscriptions. 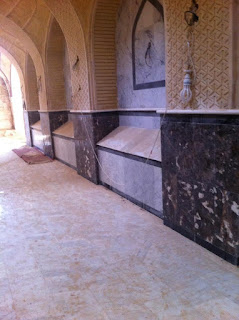