After 60 years, a landmark moment for refugees

Israel's new-found support for the Jewish refugees from Arab countries is a landmark moment, says Michelle Huberman in Jewish News: 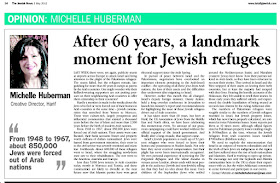 Last month there were yet again publicity stunts at airports across Europe to attack Israel and bring attention to the plight of the Palestinian refugees. The stunts failed, but the refugees remain, languishing for more than 60 years in camps as pawns by the Arab countries. One might wonder why their keffiyeh-wearing supporters are not putting pressure on their neighbouring Arab countries to offer them citizenship and absorb them into their countries?

Hardly a mention is ever made in the media about the Jews who fled or were forced out of their homes in Arab countries at the same time - Jewish communities that stretched from Yemen to Morocco. These were culture-rich, thriving, largely prosperous and influential communities that existed a thousand years before the rise of Islam and more than 2,500 years before the birth of modern Arab nations.

Between 1948 and 1967 about 850,000 Jews were expelled or forced out of Arab nations, and became refugees. Their assets were confiscated, their bank accounts frozen, and property worth millions of dollars nationalised. Jews were barred from government ministries, their entry in to the civil service was severely restricted, and many lost their means of livelihood. About 600,000 of these refugees went to Israel where the struggling newly-born State integrated them into the country and saw to their rehabilitation. The rest went to the Americas,Australia and Europe.

Less than 5,000 Jews remain in Arab countries today, mostly in Morocco and Tunisia, and these communities are likely to dwindle in the near future now that Islamist parties have won great electoral support since the ‘Arab Spring’.

In pursuit of peace between Israel and the Palestinians, negotiators have overlooked an important element pertaining to the Arab-Israeli conflict - the uprooting of these 850,000 Jews from Arab nations, the loss of their assets and property, and the difficulties they underwent upon migrating to Israel and their absorption.

However, earlier this month it all changed. Israel’s deputy foreign minister Danny Ayalon held a long overdue conference in Jerusalem to launch his ministry's report and recommendations for highlighting the issue of these Jewish refugees driven out of Arab countries.

It has taken more than sixty years, but here at Harif, the UK Association of Jews from the Middle East and North Africa, we have been celebrating this momentous event. No amount of our grassroots campaigning could have worked without the official support of the Israeli government. And finally, after a long crusade, that support came.

Israel's Jewish population is made up of 52% refugees who were forced to leave their homes and possessions in Muslim lands. Not not only have they never received compensation, but their plight has never been internationally recognised.

My own personal experience of screening the The Forgotten Refugees and The Silent Exodus in venues across London, always ends with most people in the audience (both Jewish and non) telling me that they had no idea about the plight of these Jewish refugees. Even children of the Sephardim (Jews who settled around the Mediterranean basin) and Mizrahim (‘eastern’ Jews ) don't know how their parents suffered in Arab lands, as they have been reluctant to recount their stories. They arrived in Israel and the West stripped of their assets on leaving their birth countries, but at least the majority had escaped with their lives. Hearing the horror stories of the Holocaust in Europe, they felt unable to retell their stories. In those early years they suffered silently and experienced the double humiliation of being treated as 2nd class citizens by the ruling Ashkenazi elite.

We need to discuss these facts at every opportunity. We need to explode the misconception that Israel is an outpost of western colonialism and tell the truth of how Jews are indigenous to the region and have suffered since the rise of Arab nationalism and Islamism.

Harif is working to open up debate. We encourage not only the Sephardi and Mizrahi communities here in the UK to share their experiences with us, but the wider Ashkenazi community to come forward and participate in our events.