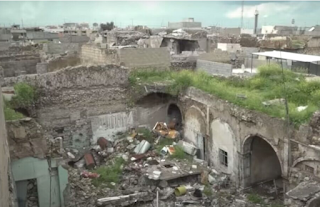 The death of  the Jewish doctor Thafer Eliyahu, leaving just three Jews in Iraq, has prompted the BBC 's Lizzy Porter to file a report on the radio programme  'From our Own Correspondent' (segment begins at 11:38).

In a fairly balanced piece, Porter surveys the rubbish-strewn Baghdad Jewish cemetery and asks what will become of the millennia-old Jewish heritage in Iraq now that Eliyahu and his predecessor Sitt Marcelle, who administered the community assets and records, have departed this world. 'They don't want to hear about us,' despairs Edwin Shuker of the Iraqi authorities. Much of Iraq's Jewish heritage has been left to crumble away.

No mention of 'apartheid' or 'ethnic cleansing' here. But it is left to the Muslim historian of Mosul in the north, Mosul Eye blogger Omar Mohammed, to offer what the Iraqi government has never done to its Jews: an apology. He has interviewed elderly survivors of what he calls 'the deportation' - the exodus of 17,000 Jews from the north of Iraq in 1950 - in an effort to document their memories of Mosul before it's too late. Seemingly speaking for these Jews, Mohammed says, 'We can forgive, but we must never forget.'

And then there were three

when All the Iraqi Jews are gone..the cemetery will probably go the Way of the aden Jewish Cemtery after the community left.....March 2020 https://besacenter.org/yemen-desecration-cemeteries/