According to Arutz Sheva, the  Biden administration has called for the release of Levi Salem Musa Marhabi, who is still in jail in Yemen for allegedly helping to 'smuggle' out a Torah scroll. The scroll accompanied the last party of Jews to be airlifted out of Yemen in 2016. The former 'antisemitism Tsar' Elan Carr has drawn atention to Marhabi's case and the American Sephardi Federation has been running  a campaign for Marhabi's  release. There are six Jews still in Yemen, or fewer. 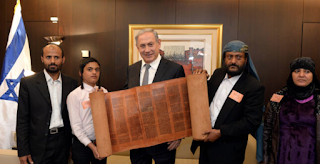 US State Department spokesman Ned Price has announced that the Biden Administration is calling for the release of Levi Marhabi, a young Yemeni Jew accused of helping Jews who immigrated to Israel take an ancient Torah scroll from Yemen with them.

For about four years, Levi Marhabi has been imprisoned in Yemen. The Iranian-backed Houthi rebels say the Torah Scroll as a 'stolen national treasure.'

Among the detainees was Rabbi Yahya ben Yosef, who was arrested by the Houthi rebels on suspicion of aiding in the smuggling of a Torah scroll.

Three workers at the Sanaa airport were also arrested on suspicion of aiding and abetting smuggling. But in the end everyone was released except Levi Marhabi, who remains imprisoned until this day.

American Sephardi Federation (ASF) executive director  Jason Guberman said the US should be more aggressive on the issue. "The State Department has called for the release of Marhabi, but it is not enough" Guberman said.