Will Sarah Halimi St pave the way to true justice?

Sarah Halimi will have a Paris street named after her. But a street name is a poor substitute for justice: Dr Halimi's murderer is to walk free after the French Court of Appeal acted that he was acting under the influence of drugs. The Jerusalem Post reports: 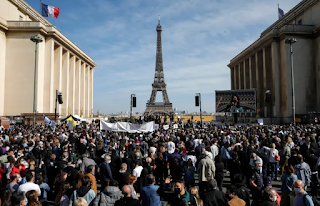 Some 20,000 protested at the travesty of justice that would allow Sarah Halimi's killer to go free (Photo: Geoffroy Van der Hassselt/ AFP via Getty images)Paris will soon inaugurate in its historic Jewish quarter a street named for Sarah Halimi, Mayor Anne Hidalgo said amid protests over authorities’ handling of the killing.
Hidalgo made the announcement on Sunday following a rally by about 20,000 people, mostly Jews, who demonstrated against the April 14 ruling by France’s highest court on the 2017 slaying. “We need to honor Sarah Halimi’s memory. And that’s what we’ll do,”
Hidalgo said in a statement, France3 reported Tuesday. “There will be a Sarah Halimi Street. It will be a way of achieving justice for her.” The street will be in the 4th District, also known as the Marais, which before the Holocaust was the heart of Jewish life in Paris.
Read article in full
Ronnie Dellal, a Jewish refugee from an Arab country now living in London, wrote this letter of protest (With thanks: Lisette):
J’ Accuse: Open letter to the French President M Emmanuel Macron:
I am writing to you and invoking the famous words of Mr Emile Zola when he addressed a century old anti-Semitic travesty that blighted the name of a previous French Republic under M. Félix Faure:
“Would you allow me . . . . to draw the attention of your rightful glory and to tell you that your star, so happy until now, is threatened by the most shameful and most ineffaceable of blemishes?
Over a century ago, the Dreyfus affair marred France's reputation in the free world and ultimately gave rise to the most disturbing events and heinous crimes.
France is now facing the same challenges, with the outrageous handling of Dr Sarah Halimi’s murder. France and its reputation is, today, at a crossroads. The path it takes will depend on whether good men and women will stand up, defend and honour the ideals of the French Republic (Liberté, égalité, fraternité) or not. Yet, M Le Président, you have in your power, as your predecessor had, to stop the above travesty from taking place and right a wrong before it raises its ugly head again.
The cornerstone of the French revolution and the Republic's ideals is that all French citizens should be able to live in freedom, treated equally and enjoy the same rights and responsibilities regardless of colour, background, religion and beliefs.
Yet there is a small, but sizeable, minority which feels that the above ideals do not apply to them. They are unable to live in freedom and forever need to have special security in their communal buildings; places of worship and even their shops. All the while their children are attending schools behind high fences and security guards. With the travesty of Dr Sarah Halimi's murder, they have now been denied equality under the law, due process and their individual right to live freely and without fear. Ultimately, if not already, they will no longer feel that they have equal rights as the rest of their French brothers and sisters.
M. Le Président, you have it in your power, if not your responsibility, to address an injustice before it becomes forever rooted in French culture. You have the power to say, not only, 'no' to anti-Semitism but more importantly, 'never again'.
How you will act now will show how far France have moved on from the Dreyfus affair and how your presidency might contrast with that of M. Félix Faure, your predecessor.
Respectfully yours
Ronnie Dallal
More about the Sarah Halimi case
Posted by bataween at Tuesday, May 04, 2021

Powerful….but is it touching the right people in France …. ….
I HOPE THEY REALIZE THAT THIS WILL SET A PRECEDENT FOR G D FORBID all sorts of crimes with the guise of influence under dope
Also
where is that criminal now.?
he is protected under supervision in a mental hospital …. Being wined and dined and treated with respect and care he probably never received before this crime ….How very sad that the justice system stooped that low !
TRULY HORRIFYING !