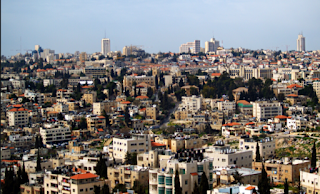 Sheikh Jarrah in Jerusalem
Furthermore, the editorial states: "Under Israeli law, Jews who can prove a title from before the 1948 war can claim back properties in the city. This cannot be justified when no similar law exists for the Palestinians who lost their homes. "
The issue of lost property ownership is a lot more complex than meets the eye. This issue demands a comprehensive solution for refugees created on both sides of the conflict - Jewish as well as Arab. Meanwhile Arab Israelis internally displaced by the conflict have been able to obtain compensation.
Hundreds of thousands of Jews, scapegoated as Zionists in Iraq, Syria, Egypt, Libya , Yemen, etc, and evicted from their homes have never had compensation or restitution for millions of dollars worth of lost property and assets.
No Jews have been able to recover land and property lost in the West Bank to the Jordanian occupation in 1948. The property came under the control of the Jordanian Custodian of Absentee Property.  Jordan frequently leased or sold Jewish-owned land to Jordanian citizens. The Israeli government has not wanted to open this particular can of worms.
Jerusalem is the only place in the Middle East where Jews are now in a position to claim restitution. But the rights of the existing Arab tenants remain protected under Israeli law as long as they have been paying rent, which  in the Sheikh Jarrah case they have not.
This long-running property dispute is simply a pretext for Hamas, acting as a proxy for Iran, to stoke a major crisis.
Breaking the silence on Jewish property rights

Bataween, France24 was very bad today in a rant by one Doug Herbert, full of lies inciting against Jews.

In any case, why should Arabs have rights to stay on Jewish property which is part of the grounds of a Jewish holy place? And because the Arabs were not only the aggressors in 1947-48 but in 1967, 1973, and in the subsequent "intifadas"? The Arab side committed ethnic cleansing in this very area of the Shimon haTsadiq Quarter at the start of Israel's War of Indepence. This fact should be acknowledged by the international media which have little credibiliy anyhow.