Unsettling parallel between the Farhud and today's riots

There are disturbing parallels between the Farhud massacre, whose 80th anniversary falls at this time, and mob violence directed against Jews in the wake of the Israel-Hamas conflict, writes Israel Kastnett in JNS News. 'Remember the Farhud' is a social media  initiative to raise awareness of the lessons of history: 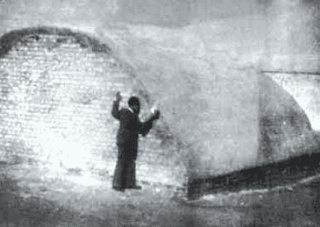 The victims of the Farhud were buried in a mass grave
The general parallel between the Farhud pogrom and the riots of last week is unsettling.
According to the United States Holocaust Memorial Museum, Arab nationalists in Iraq “perceived the Baghdad Jews as Zionists or Zionist sympathizers and justified the attacks as a response to Arab-Jewish conflict in Palestine.”
The Arabs claim their rioting this week is a reaction to the Arab-Jewish conflict in Sheikh Jarrah and the Temple Mount, both in Jerusalem. But it only drives home the point that anti-Semitism still exists and must be fought everywhere.
‘Double standard in application of international law, human rights’ The “Remember the Farhud” project aims to educate the public on the history of the Farhud and asks the public to light a virtual candle in memory of the 180 pogrom victims. It also asks readers to add a specially created frame to their Facebook profile in order to spread awareness of the Farhud and express solidarity with the families who mourn those who were killed during the deadly pogrom.
“The Farhud was a tragic event that sounded the death knell for the oldest Jewish Diaspora community,” said Iraqi-British Jewish businessman and philanthropist David Dangoor, the initiator of the “Remember the Farhud” initiative.
“It is vital that the Jewish world and beyond commemorate the Farhud to understand better how to deal with hate, incitement and violence, and prevent such events from happening in the present and future.”
Former Knesset member Michal Cotler-Wunsh from the Blue and White Party told JNS “what we see in Israel’s streets is actually stoked by what is happening on digital platforms utilizing anti-Semitic tropes. It is imperative for Israel to engage in discussion, to learn about and identify anti-Semitism for what it is,” she said. “Anti-Semitism is always there and has the ability to mutate,” she said. “The point is to identify it. The imam inciting the masses in the mosque? That’s anti-Semitism.”
Read article in full
Here is an article in the Jerusalem Post on a similar theme by David Dangoor:
Now that the latest conflict between Israel and terrorist groups in Gaza has ended, it is important to look back at one of the more wrenching and unprecedented aspects of the recent conflagration.
The attacks, lynchings and pogroms in mixed Jewish-Arab towns and cities in Israel is arguably the most worrying manifestation of the divisions in the country, and must be immediately addressed at all levels.
One of the most important elements to this is how best to understand and then combat hate, incitement and violence between communities.
For this, we can find a very sad precedent in the Farhud, the pogrom in Baghdad and Basra, which took place exactly 80 years ago, which was the beginning of the end for the Iraqi Jewish community, the oldest Jewish Diaspora.
Read article in full
We didn't escape Khomeini's Jew hatred to live with it again in LA - Times of Israel  by Karmel Melamed:
For many years both my parents shared with me portions of this painful story of Berookhim’s execution and the horrific Jew hatred they face under the current Islamic Khomeini regime.
I knew it was a terrifying experience for them, but not until recently when hearing the news of three young Iranian Jews being randomly beaten by pro-Palestinian thugs on the streets of West Hollywood just for being Jewish, did my parents’ horror from Iran truly sink in for me.
This incident has shocked the Los Angeles area Iranian Jewish community and all Americans regardless of their religion, must call for the authorities to put an end to this shameful thuggery.
Read article in full
Posted by bataween at Tuesday, May 25, 2021

Email ThisBlogThis!Share to TwitterShare to FacebookShare to Pinterest
Labels: Antisemitism, Holocaust in Arab and Muslim lands, Jews of Iran, Jews of Iraq

"the Arab-Jewish conflict in Sheikh Jarrah"
Kastnett is mistaken. The locus of this conflict is the old Shimon haTsadiq Quarter, called such by Jews and Arabs alike before 1948. Jews were driven out of this area --focussed on the Tomb of Simon the Just, Shimon haTsadiq-- not long after the start of the war in the country which became Israel's War of Independence. The area was a Jewish holy place and is so listed as a Jewish holy place in the 1949 armistice accords, which Jordan violated by preventing Jewish access to the site.

By using the term "Sheikh Jarrah", an adjacent but separate neighborhood from Shimon haTsadiq Quarter, we give an undeserved victory to the Arab nationalist, Islamic supremacist forces of Hamas and its allies.