The worldwide Syrian Jewish community is mourning the passing of Rabbi Avraham Hamra, the last chief rabbi of Damascus, who has died in Israel at the age of 78. Few announcements of his death have mentioned, however,  the seminal role Rabbi Hamra played to coordinate the funding of Jewish departures from Syria during the 1980s and 90s, when the community was held hostage by the Assad regime. He was instrumental in arranging the smuggling out of Syria of the Damascus Keter, a priceless and beautifully preserved medieval manuscript, in a black shopping bag. 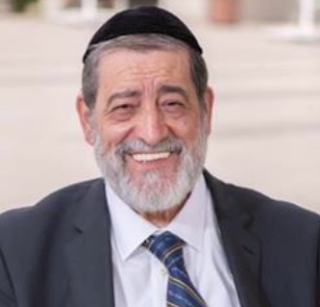 Rabbi Hamra served as the last chief rabbi of Damascus, from 1976 to 1994, when he immigrated to Israel.
In addition to serving as leader of the Syrian community in Israel, based in Holon, Rav Hamra frequently visited the Syrian community in the New York area.
His daughter Mrs. Aliza Azan, and three of her children, were tragically killed in a fire on Chanukah 2017.
A son of Rabbi Hamra is a prominent hazan in the  Har Halebanon community in Brooklyn.
When he was in Syria in the 1990s, Rabbi Hamra worked quietly with the Canadian fundraiser  Judy Feld Carr for the release of Syrian Jews in prison and for ill Jews to be allowed to leave. This involved his negotiating  with the secret police the price of Jewish departures.  Keeping meticulous accounts, he oversaw  money sent from the Feld Fund and funnelled grant aid from the American Jewish Committee to Jewish schools, teachers and those in need.
According to the Ransomed of God by Harold Troper, Judy Feld Carr asked Rabbi Hamra to help her get a priceless Jewish manuscript of the Torah, the Damascus Keter, out of the basement of a Syrian synagogue. She arranged for a western visitor to Syria to call on Rabbi Hamra. He handed over a small leather-bound book in a cardboard sleeve to the visitor. The visitor put the package in an innocuous-looking black plastic shopping bag and smuggled it out of the country.
A deal was reached for Syria's remaining 3,000 Jews to be permitted to leave. By the end of 1993, Rabbi Hamra himself applied for an exit visa, ostensibly to visit family in New York.
Before his departure for Israel, Rabbi Hamra asked Judy's permission to take the Keter of Damascus to Israel, where it is now in the National Library in Jerusalem.
Posted by bataween at Monday, May 10, 2021