Sunday 9 May marked the 42nd anniversary of the execution of Iranian businessman and Jewish community leader Habib Elghanian by the Islamic Republic. Journalist Karmel Melamed, who has tirelessly raised the issue of the persecution of Iran's Jews, had this article published by IranWire: 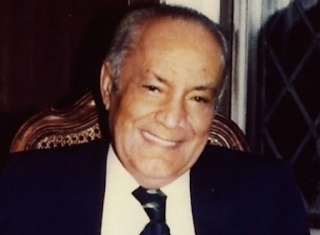 Habib Elghanian, executed by the Iranian regime in 1979
Both Elghanian’s vast contributions to the Iranian Jewish community and his 20-minute show trial for espionage in 1979 have been widely reported since then. But less well known are the significant contributions Elghanian made to wider Iranian society.
Many of those who worked closely with him in the business realm or philanthropy were either executed by the regime, or have long since passed away. Recently, however, I had the opportunity to sit down and chat with Nasser Oliaei, an Iranian Muslim businessman and former MP, about his long-time friendship with Elghanian. Oliaei is now in his late 80s and lives in Newport Beach, California.
He worked alongside Elghanian in Iran’s National Chamber of Commerce before the fall of the Shah. Whether it was through encouraging international trade, giving to charitable causes or supporting his thousands of Iranian employees, Oliaei describes Elghanian as nothing short of a remarkable Iranian patriot.
Read article in full
Posted by bataween at Wednesday, May 12, 2021