Meron tragedy is greeted with outpouring of hate

The Lag b’Omer tragedy at Mount Meron in Israel, which led to at least 44 deaths and injuries to many more, has been greeted with an outpouring of hatred on social media.  Despite the Abraham Accords and multiple initiatives to improve Arab-Jewish relations, there is still a long way to go. Report by Jenni Frazer in The Jewish Chronicle: 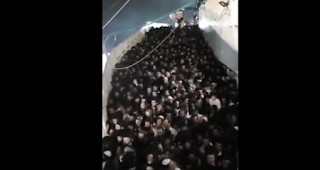 The narrow passageway where the stampede occurred (Photo: TOI)
According to investigative journalist David Collier, a report of the deaths by Al-Jazeera had garnered 30,000 responses, and that “10,000 — 33 per cent — were either laughing at or loving the fact [that] innocent Jews have died. The most ‘liked’ comments were the most vicious”.
“It isn’t about a few sickos celebrating the awful tragedy in Israel. It is the scale of it,” he wrote on Twitter.
Another report of the incident on a site called New Press featured the line: “A number of Israeli settlers were killed and wounded due to a bridge collapse in Galilee, north occupied Palestine”.
This received reactions such as “Even the bridge wants them dead” from someone called ‘Levantine Pali’, while a poster known as Ms.Andry responded with a picture of someone yawning and the comment “Drinks on me, y’all!”
Read article in full
Jerusalem Post
Arab towns offer food and drink to Meron survivors
Posted by bataween at Monday, May 03, 2021

What has humanity come to ????
where is humanity anyway ???