Point of No Return has been following attempts by Jews to reclaim land and property in Jerusalem from which they were driven in the 1930s and 1940s. Now a  property dispute in Sheikh Jarrah, east Jerusalem has been politicised by Hamas to stoke  rioting and violence;  international bodies and members of the US Congress have rushed to condemn Israel.   BICOM has a good summary of the current situation: 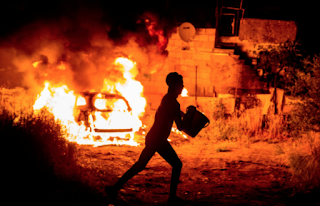 The battle over legal ownership of several buildings in the Sheikh Jarrah neighbourhood has been ongoing for the last 15 years in Israeli courts.
Earlier this year, the Jerusalem District Court upheld an October 2020 Jerusalem Magistrate Court decision that ruled the ownership of land belonged to the Jewish group Nahalat Shimon Co and ordered 25 Palestinians from four families to vacate properties they are living in by 2 May 2021.
Following this decision, the residents appealed to the Supreme Court, who gave both sides until 6 May to reach a compromise. They failed to do so, and the Supreme Court will make a ruling on 10 May. According to the Supreme Court, the land in question in Sheikh Jarrah, adjacent to the tomb of Shimon Hatzaddik, was “owned by Chief Rabbi (Hacham Bashi) Avraham Ashkenazi and Chief Rabbi Meir Orbach until the War of Independence [1948], after they purchased it in 1875 from its Arab owners”.
Subsequently, two Jewish organisations, Va’ad Eidat HaSfaradim and Va’ad HaKlali L’Knesset Yisrael, worked to register the land with British Mandatory government in 1946. After the 1948 War, Palestinian families who were refugees and lost their homes inside Israel were resettled in the Sheikh Jarrah neighbourhood by UNRWA and the Jordanian government.
Following the 1967 Six-Day War, Israeli forces captured the area and the state confiscated the homes under Israel’s Absentee Property Law. The properties were subsequently registered with Israeli authorities under the two Jewish organisations in 1973. In 2003, the land was sold to the pro-settlement group Nahalat Shimon
In 2020, the Magistrate Court noted, “Throughout all of the deliberations, the defendants claimed through their counsel that they were not tenants but rather held the property rights …  apparently, as they realised that they had not convinced the Court that they were the owners of the property, the defendants claimed for the first time that they are tenants who should not be removed from their homes.”
Read article in full
Sensing victory, 'shabbab' turn property dispute into a major crisis (Khaled Abu Toameh, JPost)
Jewish Journal article by Micha Danzig
More about Sheikh Jarrah
Posted by bataween at Sunday, May 09, 2021

Bataween, don't you think it would be best to call the location of the housing dispute in Jerusalem by its right and original name? Before 1948, Jews and Arabs called the area Shimon haTsadiq, although the Arabs pronounced in an Arabic manner. The tract of land that the houses at issue are located on was purchased by Jews, Ashkenazim and Sefardim acting jointly, because it was the location of the presumed tomb of Simon the Just [Shimon haTsadiq], a respected high priest of the Second Temple era. Houses were built for poor Jews on the site near the tomb and the tomb was refurbished, while part of the tract was left undeveloped. It had been considered a Jewish holy site for hundreds of years, which is well documented. After Jews had been ethnically cleansed from the site in December 1947 - January 1948, it may have been only natural for Arabs to see it as part of the larger Sheikh Jarrah Quarter, thus conceptually and semantically incorporating the site into their own proprietary territory. Before 1948 the two quarters were adjacent but separate [see Dan Bahat's historical atlas of Jerusalem].
The Jewish refugees from the Shimon haTsadiq Quarter were the first refugees from that war who could not go back to their homes after it, whereas Jewish refugees from south Tel Aviv could go home after the war. This fact is significant since partisans of the Arab cause are casting the onus of "ethnic cleansing" on Israel whereas Arabs starting driving out Jews from their homes in December 1947.
Jordan settled Arabs on the tract of Shimon haTsadiq in 1954-55, building houses for them on Jewish-owned land.
Why should Arabs be given special privileges for staying on the land since the Arab side was the aggressor in 1947-48 and in 1967 and 1973? Why should Arabs benefit from the original ethnic cleansing of 1947-48

Jewish leaders of Sefardic and Ashkenazi communities [`edot] in Jerusalem purchased the tract of land in 1878. There is a marble plaque inside the tomb stating these facts.

The blogpost at the link shows colorful illustrations of Jewish holy sites made over a period of several hundred years, proving the identity of the site as a Jewish holy place:
http://ziontruth.blogspot.com/2010/02/tomb-of-simon-just-shimon-hatsadiq-in.html

The synagogue on the site of the Shimon haTsadiq Quarter, maybe 150 feet away from the homes at issue:
http://ziontruth.blogspot.com/2009/08/old-synagogue-in-shimon-hatsadiq.html