Farhud Commemoration was a 'learning and healing experience'

Some 350 people from around the world Zoomed in to the 80th Anniversary Commemoration of the Farhud, June 1 and 2, 1941 Shavuot massacre of at least 179 Jews. The massacre sounded the death knell barely ten years later for the oldest Jewish diaspora, which had been in the country since Babylonian times, but had contemporary echoes in the antisemitism sweeping across the West in recent weeks. 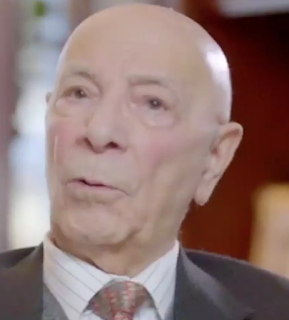 A recording was heard of testimony by Steve Acre z"l. He had witnessed the Farhud from the top of a palm tree
The Commemoration, held on 30 May 2021,  was arranged by the Spanish and Portuguese Synagogue in Montreal and Harif. It featured a film edited by Sephardi Voices UK showing witness testimonies to the murder, looting, rape and mayhem unleashed during those two days by soldiers of the defeated Iraqi army, Nazi sympathisers and Bedouins in search of loot.
One witness told how her family had escaped one day before, at the same time as the Grand Mufti of Jerusalem and pro-Nazi coup leaders, and had stayed in the same hotel. Others told how they had narrowly escaped death by changing their route home. Muslims had protected Jews in several cases. The Jews could never feel at home in Iraq again, and those who were not able to leave turned to Communism or Zionism as their salvation. ( Event video recording to come soon).
The Hon Irwin Cotler spoke of how a resurgence in antisemitism had not provoked a sense of outrage among decent people in the West. Rabbi Joseph Dweck quoted the author Will Durant:" For barbarism is always around civilization, amid it and beneath it, ready to engulf it by arms, or mass migration, or unchecked fertility. Barbarism is like the jungle; it never admits its defeat; it waits patiently for centuries to recover the territory it has lost.”
Some 28 organisations co-sponsored the event including representative bodies such as the Board of Deputies of British Jews, universities, such as the Tel Aviv university Moshe Dayan Center, and bodies fighting antisemitism, such as B'nai B'rith and the Simon Wiesenthal Centre.
Thanking the participants,  organiser David Nathaniel, head of the Community of Babylon Iraqi Jews of Montreal, stated:
"We were able to share a deep history and a powerful collective message in a dynamic fashion and the feedback received both during the event and since has been numerous and overwhelmingly positive! It was a learning experience for many and I believe a healing opportunity for all of us who have been traumatized over the past few weeks. We honoured the victims of the Farhud, their families, and friends in a respectful and impactful way."
Yvonne Green, poetess, brought tears to many eyes when she re-read a poem that Harif had commissioned for the 75th anniversary of the Farhud.  We are reprinting the full text below. 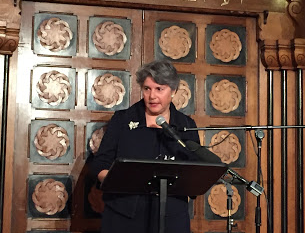 Yvonne Green recited her poem for the first time at the 75th Anniversary Farhud Commemoration at Lauderdale Road Synagogue in London.
The Farhud: Baghdad’s Shabu’ot 1st and 2nd June 1941
We walked on Shabbat
in the Bustan al-Khass
(lettuce orchards)
on the East bank
of The Dijla (The Tigris),
or in al-Saa’doun, built
to look like Hyde Park.

Watch us work, prosper, plod
tread the middle ground during
a two thousand six hundred year
sojourn with family, food, festivals.
Listen to us speak Aramaic, Qiltu,
then Gilit. You never learned
our languages after you arrived,
we wrote literatures preserved
for you now in different geographies.
Watch Britain’s renegade Grand Mufti
translate National Socialism into
his Promised-Land apartheid, listen
to the whispers that the Fuhrer
was born in an Egyptian village.

Watch him and hundreds of Palestinian
and Syrian intellectuals-in-exile train soldiers,
police, militia-men and children, watch
nothing stop the Golden Square Generals,
even once their leaders temporal and spiritual
run away from the British, for whose oil-fuelled
infantry eight kilometers was further than the walk
from Ambassador Cornwallis’ dinner plate
to his card table.
Look, there’s a man in a dark suit at Maqbra,
who’ll later press his cheek and arms up
against a semi-cylindrical grave where
one hundred and eighty Farhud-dead are buried.
This is not the only tomb, they were not the only dead.
But go back before the Omer, watch us
tremble as we asked “Mnein Jitem”
that Erev Pesach after the lawyer,
Rashid al-Gaylani’s coup turned
the hilleq bitter. Watch our hopes surge
when within the month he and the Grand Mufti
escape from the British to Iran, plummet
when Yunis al-Sab’awi declares
himself Governor General and orders us
penned in our homes, soar again when it’s he
who’s deported within the day. Hear us attest
to our treble-terror reprieved when we eat
our Tbit on the Shabbat which runs
into Tikkun Leyl, and hear Regent
Abd al-Illah’s due back the next day,
Sunday June 1st. Watch us cheer him home
on the first day of ‘Eid al Ziyarah.
Then watch soldiers, police, civilians attack us
on al-Khurr bridge, at al-Rusafa, Abu-Sifain
everywhere until 3 a.m. and silence. Watch
at 6 a.m. on the second day of Hag when
they start again. Not just the poor from al-Karkh
who cross the river empty handed,
then load-up having cruelly sacked
our homes, shops, synagogues,
but from everywhere they yelp
“Idhbahu al-Yehud” (butcher the Jews).
Drilled by Salah al-Din as-Sabbagh,
or by centuries of knowing our place,
keeping the rules, paying the price
being no guarantee of protection.
They cut up Jewish babies and threw them
into the undertow, no Moses survived.
They raped girls and old women,
cut their breasts, no Dina survived.
They beheaded and severed, taunted
and tore. Dragged Jews from buses
which they used to run them over.
Every attack intended to humiliate.
The dead, hurt, stolen, destroyed
uncountable, even once the Regent
called in the cut that felled
the saturnine mob. Where was natural,
civil, military, sharia law? The assumed
duty to dhimmi?
In the stand taken by Moslems
like Dr Sa’ib Shawkat, Dean
of Baghdad’s Medical College.
In the acts of landlords
who risked their lives to save those
whose houses the Hitler Youth-styled
Futuwwa had painted with red khamsas.
In the arms of neighbours
who caught children in blankets
when they were thrown to safety
and sheltered families who jumped
across flat roofs where Baghdad
used to spend its summer nights.
Yes, we fought back, we boiled
siraj (sesame oil) and threw it
from our shnashil (latticed balconies)
where women, unseen, had watched
their households’ comings and goings.
We used the bricks from our parapets,
we had no guns, few had iron fists.
Since the funerals our children
remember with new knowledge
and their picnics of beith-bla’ham,
timman-ahmar, and kahi never go south
to al-Kifl for the pilgrimage, sing
Shirit Hagvarim at its seven
waystations, or hear the tomb
of Yehezkel cry for its Jews.