One of the fashion industry's leading designers, Alber Elbaz, has died of COVID-19. Elbaz was born in Casablanca and immigrated with his family to Holon in Israel when he was eight months old. Aged seven he was already sketching dresses. His mother encouraged him and sent him off to New York to become a professional designer with $800 in his pocket. 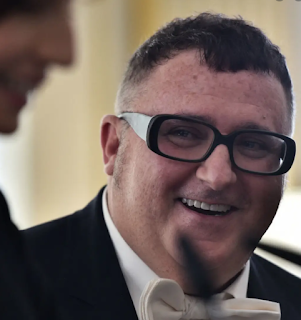 Albert Elbaz: ebullient The fashion world reeled with shock and grief to learn that Alber Elbaz, the designer best known for his spectacular rejuvenation of Lanvin from 2001 to 2015, had died at a Paris hospital. He was 59.
His death on Saturday, due to COVID-19, was confirmed by Compagnie Financière Richemont, his joint venture partner in AZ Factory, his latest fashion venture.
He was among the leading fashion figures who have died of COVID-19, who include Kenzo Takada and Sergio Rossi.
An ebullient character prized for his couture-like craft, Elbaz took a five-year hiatus after being ousted from Lanvin and just launched AZ Factory, hinged on solutions-driven fashions, entertainment and tech.
While his name was not on the label, the start-up was steeped in Elbaz’s personality, humor, and his inimitable flair for soigné fashions.
“I have lost not only a colleague but a beloved friend,” Richemont founder and chairman Johann Rupert said in a statement, expressing his shock and sadness at Elbaz’s sudden passing. “
Alber had a richly deserved reputation as one of the industry’s brightest and most beloved figures. I was always taken by his intelligence, sensitivity, generosity and unbridled creativity,” Rupert said.
“He was a man of exceptional warmth and talent, and his singular vision, sense of beauty and empathy leave an indelible impression.
Read article in full
Funeral of a legend in Holon
Posted by bataween at Sunday, May 02, 2021