An interview with Yves Fedida of the Nebi Daniel Association has been taken down from the website of the Egyptian medium Akhbar el Yom after just two days. Mr Fedida criticised the few Jews still in Egypt for not supporting international efforts to preserve international heritage. He accused the Egyptian government of excluding Jews from the official re-opening of the restored Eliyahu Hanavi synagogue and for not permitting access to Jewish records. It seems that the Egyptian authorities are not quite ready to listen. Here is the original: 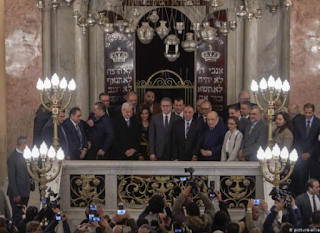 No Jews were invited to the  official re-opening of the Eliyahu Hanavi synagogue in 2020.

How do you see Egyptian policy towards its neighbours and Israel?

Our wish is obviously that peace should reign in the whole region and among all peoples. We are sad to see that the peace signed over 41 years ago is still a cold peace, far from the warmth normally present in the genes of both peoples. Still, al hamdoulilah it is peace.

- How do you see the measures taken by President Sisi to approve the coexistence between people of religion in Egypt?

I would not be so bold as to comment on the measures taken by President Sisi; but it seems normal to me that people of different religions should coexist peacefully, whatever the country. The opposite is shocking. Therefore any step in this direction can only be applauded.

Did you see any change in Egypt during your visit? How do you see Egypt now?

Egypt is constantly changing due to its large demographics. Although much remains to be done, much infrastructure work has been done or is being done, some truly pharaonic, to face the future. I was impressed by the increased level of education, knowledge, and the entrepreneurial thirst of the youth. But Egypt is also eternal in its beauty and in its unique people. Hospitality, kindness, empathy, respect for others and this capacity for humor and self-mocking at all times, are always found in these very endearing people. This will always make me proudly say: ana Masri! even though it hasn't been my country for a long time. Egypt is a great power playing a moderating role at the regional level. Unfortunately, year after year, there are still so many wildly anti-Semitic books at the Cairo International Book Fair. It is not with this kind of low-level propaganda that you create harmony or understanding. We are only stirring up unnecessary hatred.

How did you reach out to Jews in Egypt during the time of President Sisi?

We suggested supporting their interest in safeguarding heritage as long as there was total transparency for the establishment of an organization that would include French, English and American Jewish institutions as well as Egyptian Jews in these countries. They wanted  nothing to do with this  organization, nor transparency. Unfortunately they are only a handful and find themselves quite alone. On the contrary, instead of  working together, they took measures outside legal norms, without taking  advice from rabbis, and deprived us of the community registers and archives so essential to our co-religionists in their daily lives. We still continue to work with the community of Alexandria for the maintenance of the three cemeteries as we have done in the past for the dedication of the Eliahou Hanabi synagogue.

After your visit to Egypt and the opening of the Eliahou Hanabi Temple after the renovation,  do you see progress?

Since 2009 we have drawn the attention of the Ministries of Culture and Antiquities (at the time headed respectively by Mr. Farouk Hosni  and M. Zahi. Hawass) on the need to restore the Alexandria synagogue, one of the oldest of the city's monuments,  frequently restored and rebuilt in the past. The last reconstruction dates back to 1853. A study was launched in 2010 with the help of specialist engineers from Cairo University. This study was to lead to the restoration and the first scaffolding was put in place in 2011. Unfortunately the Morsi government froze everything.

We reiterated the urgency of a restoration to Mr. El Anany, then the new Minister of Antiquities. With the collapse of the roof this became obvious. The same scaffolding was still in place seven years later, but this time extraordinary and meticulous work was undertaken. We are of course grateful to the Egyptian government and the Egyptian people for preserving this building for what it symbolizes.

The official inauguration in January 2020 saddened us because no Egyptian Jew or association from abroad and no rabbi had been invited. There was no one wearing a Yarmulka (Ta'eya). We wondered if it would have been natural to open a mosque without prayer, and wearing shoes?

Fortunately, with the help of the embassy in Paris and Washington, we had obtained permission to bring in a group  to say dedicational prayers in the synagogue and memorial prayers in cemeteries. This took place in mid-February. The security was perfect and I'm embarrassed to admit that we caused them a lot of trouble because everyone who came was welad el balad, they were at home and wanted to be independent.

What are your demands of the Egyptian state?

We have been asking the Egyptian state for 17 years to allow us a copy - and only a copy - of our community archives and our identity records, essential to the practice of our religion and without  any financial significance. We want the copies to be  kept with the  Chief Rabbinate of France, as these documents were previously with the Chief Rabbinates of Alexandria and Cairo. I hope they will listen to us. In any case, they should never have left the community offices in  Alexandria and Cairo. Why are the Jewish records alone  inaccessible? Are the Greek, Armenian, Catholic and  Protestant records treated in the same way? No! -

Is the Jewish community of Egyptian origin in France in touch with the diplomatic mission in Paris?

We have always maintained cordial and respectful relations with the diplomatic mission in Paris. The mission listens to us and understands our request but nothing can be decided unless Cairo chooses to do so. It helped us a lot with our February trip.

Did you ever live in Alexandria? How come?

I was born in Alexandria as were my parents, grandmother and great-grandparents. I lived there up to the age of 15 in Sporting and I went to St Marc College, then to Ennasr Boys School. It was a blessed era in a wonderful and warm city. I was at home, in my country, in my house, surrounded by my family and  friends, until the stupidity of men dictated otherwise. I find it hard to recognise my city now - But I'm sure that it too finds it hard to recognise me!

What is your message to  Egyptian Jews around the world after your visit?

I would like them  to know that there was more than 2,300 years of Jewish history in this country, so  rich and ancient. This should give us hope for us to be able to live again in symbiosis. Iwould like them to be proud of this community heritage left by our parents. May they help protect it, while acting as a bridge between our two cultures.