Discussions on property restitution are asymmetrical

The Sheikh Jarrah  controversy - where Arab tenants have refused to pay rent to Jewish owners claiming restitution of the property they live in - has spotlighted a larger  issue: legal discussions regarding restitution of properties lost in the course of the conflict tend to arise only on the side where Israel has the power, argues Jonathan Spyer in the Jerusalem Post: 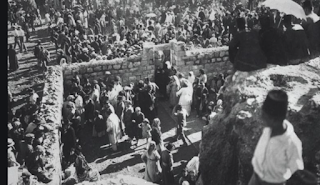 For Palestinians and their supporters, the Sheikh Jarrah issue has become emblematic of what they regard as the built-in injustice of arrangements put in place by Israel following the 1948 and 1967 wars.

The Legal and Administrative Matters Law, passed in 1970, allows for Israeli property owners who owned properties that in 1948 were transferred to Jordanian control to claim them back from the Israeli administrator-general.
Property abandoned by Palestinian Arabs in the 1948 war was transferred in its entirety to the Custodian of Absentee Property, in line with the Absentee Property Law of 1950. An amendment to the law allows Arab-Israeli citizens and residents of east Jerusalem to claim monetary compensation for properties transferred to the Custodian, on the basis of the properties’ value on November 29, 1947.
But no legal path for the restitution of properties exists. Backers of the Jewish efforts to reclaim property in eastern Jerusalem, meanwhile, maintain that they are following existing legal means in an attempt to right an injustice – namely, the refusal of the protected tenants to pay rent, as required by law.
They further assert that this process is being undertaken without reference to any other situation or larger political context.
These legal niceties aside, there is a harsher, less diplomatic reality which is the reason that many Israelis may feel few pangs of conscience with regard to events in Sheikh Jarrah.
Legal discussions regarding restitution of properties lost in the course of the long conflict between Jews and Arabs tend to arise only on the side where Israel has the power.
Where Arab participant countries in the 1948 war had and have jurisdiction, the matter of any claims to properties lost in the 1948 war by Jews expelled from these areas is regarded as closed. With regard to properties lost by Jews to Arab states, the law is the familiar one of greater force. The states in question, all dictatorships, are not interested in discussing the rights and wrongs of the issue. They have the capacity to enforce this preference. Hence no such discussions take place.
During the period of 1948-67, for example, when Jordan ruled east Jerusalem and the West Bank, no legal avenue for recompense was available to Jews who had lost property as a result of their expulsion by Jordanian forces.
The combined value of lost Jewish-owned properties in the Arab world and Iran, according to an Israeli investigation carried out in 2019, may amount to $150 billion. But these properties, many of them owned by Jews expelled from Arab participant countries in the 1948 war such as Iraq, remain beyond the reach of their legal owners. No path for compensation is available.
An Iraqi Jew seeking to petition, for example, the current government in Baghdad for compensation for loss of property incurred during the expulsion of Iraq’s Jews in 1951 would rapidly discover the futility of any such effort. For anyone with knowledge of the Middle East, the very idea of such an attempt indeed sounds absurd.
From this point of view, the apparent imbalance thus reflects a larger balance. Where Israel is in control, the matter is subject to discussion, and necessarily imperfect but existing legal process. The tenants at Shimon Hatzadik, for example, may find it unfair or unjust that they are required to pay rent to the property’s owners. But should they prove willing to do so, their residence rights will be protected by law.
There is no reflection of this on the other side, where the automatic assumption of the absolute justice of the Arab Muslim position translates into a similarly automatic dismissal of any legal process for individuals associated with the enemy camp. This is the harsh, usually unstated accounting of ethno-religious conflict.
Read article in full
Posted by bataween at Sunday, May 16, 2021