BBC airs tale of Jew's escape from Iraq in 1971 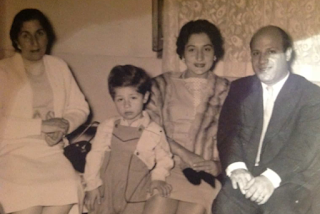 Edwin as a child with his parents and grandmother

Almost exactly fifty years ago, 2,000 Iraqi Jews made the perilous journey from their homes in Baghdad through the north of Iraq and Kurdistan and over to border to freedom. One of them was Edwin Shuker, then a 16-year-old.

He tells his story in the BBC series Witness. (9 minutes.) His family had two hours to prepare for their departure. This happened in the dead of night, using a succession of taxis and smugglers. There was always the risk of arrest and imprisonment.

The final leg of Edwin's journey was in a truck. The driver was a young Kurd. ' When you tell the story of your escape,' said the driver,' Never forget to say that the Kurds saved your life.'

By chance, Edwin was to meet the young man again thirty years later. His name was Massoud Barazani, and he became president of Kurdistan.