A young Canadian Jew has embarked on a project to clean up Khartoum's Jewish cemetery. Chaim Motzen has set up a website where people can share details and photos to help identify graves. Will Brown writes in the Sunday Telegraph (with thanks: Nelly, Lily) 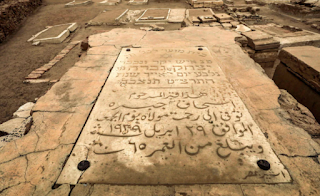 The Jewish cemetery, one of the last remnants of  a Jewish community in Sudan,  was vandalised as used as a dumping ground

Mr Motzen, who now develops renewable energy projects across Africa, decided to travel back to see the new Sudan after the revolution.

“There was a remarkable difference,” he says. But when he saw the graveyard, his heart sank. The rubbish piles had grown four feet high and there was a pungent smell of urine and rot.

Mr Motzen asked for and immediately got permission from the Minister of Religious Affairs Nasr Eldeen Mofarih in the new transitional government to restore the site as a private individual in January 2020. He paid for a Sudanese archaeologist and dozens of workers out of his own pocket and got to work.

Over several weeks they removed some 14 trucks of almost everything imaginable from the site. “There was about five metric tonnes of glass, car parts, a crazy amount of dirt, medical waste, lots of scorpions, and even beehives,” he says.

Standing in the beating sun with the jangling sounds of the city all around him, Mr Motzen points to a small stone slab marked with Star of David. The grave had been broken apart and scattered across the site. But after hours of work, he had managed to piece together the fragments and translate the Arabic words.

The small grave belonged to Diana Yacoub Ades, a small girl who had died suddenly in 1959 at just eight months. With this information, Mr Motzen explains how he tracked down Diana’s first cousin in London.

The 88-year-old Albert Iskenazi told the Telegraph he was shocked when he heard the news. Mr Iskenazi grew up in Khartoum and remembered his baby cousin clearly. “I remember Diana well. She died suddenly of a fever. It made me feel very happy that he found the gravestone. Now we can mourn her properly.”

“Our happiest days were in Sudan. We used to go to visit our Muslim friends during Ramadan and wish them a happy feast,” says Mr Iskenazi.

“It’s absolutely amazing,” says Daisy Abboudi, founder of the research project, Tales of Jewish Sudan. “He found fragments of my great grandmother’s gravestone, as well as other graves of family members. There is something about the physicality of graves which is so important to people.”

“When I visited in January 2020, I assumed that physical link to my history was lost to time. There was nothing people could point to and say my ancestors were here. And then suddenly there is. It's very powerful.”