News has reached Point of No Return of a worrying spate of attacks on Jews on the island of Djerba, Tunisia, one of the last remaining functioning Jewish communities in the Arab world. 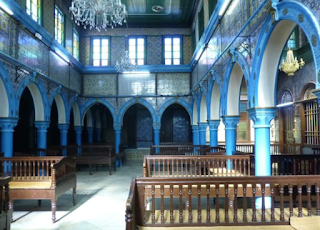 The annual pilgrimage to the Al-Ghriba synagogue on Djerba is scheduled at the end of April.

The attacks were publicised on the Facebook page Tunes et  les Assimilės Tunes but have not been widely reported in the press and media. Local sources have attempted to suppress or deny the antisemitic character of the attacks.

On 7 April, a Jewish girl aged 16 was attacked by two Muslim youths on the island's Jewish ghetto,  Hara Kbira. The youths seized her mobile phone. This was not a simply mugging, however, as the attackers attempted to suffocate and strangle the girl. She fought off her attackers 'like a lioness'. After two passers-by appeared, the youths were arrested.

The antisemitic nature of the incident was clear to Yakoub Peres, who posted a description on Facebook. However, his father-in-law Haim Bittan, chief rabbi of Tunisia, forced Peres to remove the post.

In a previous incident, a boy of ten, wearing a kippa and tsitsit was beaten up.

In an incident reminiscent of the Nazi era, a Jew was made to remove his trousers. He was tormented, spat upon and told 'to go back to his country'.  Yet the Djerba Jewish community, which today numbers around 1,000,  has existed for 2,000 years and predates the Arab invasion of Tunisia.

There was a fourth incident, but no details are available.

The Tunisian civil rights NGO Attalaki condemned the incidents as antisemitic. They have occurred in the run-up to the annual al-Ghriba pilgrimage at the end of this month.

This event was traditionally the highlight of the Djerba tourism calendar. This year, few visitors will be able to travel to Tunisia because of the pandemic.

The election of Kais Saied as President of Tunisia  is thought to have fostered a rising climate of antisemitism. The President himself has been accused of slandering Jews in an attempt to distract from the economic crisis.

Saied was elected two years ago on campaign promises that he would maintain no ties with Israel, that normalization with Israel constitutes treason, and that he would bar Israelis from visiting the country.

Remember what has happened to thy Brethen In Yemen and Iraq...Get OUT and GO till israel while you still can....