We need to acknowledge the Shoah's impact outside Europe

The Holocaust did impact  the Jews of the Middle East and North Africa, and it is a near certainty that they would have been targeted for extermination had the Nazis won WWII. However, argues Georgia Gilholy, the Arab states remained faithful to Nazism's legacy of violent antisemitism when they deported and dispossessed their Jewish populations after the war was over. Read her excellent Times of Israel blog (with thanks: Imre, Lily): 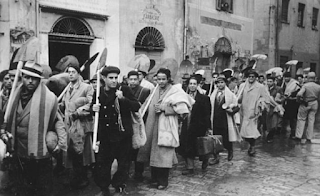 Jews being marched off to labour camps in Tunisia during the Nazi occupation of 1942 (Photo: Yad Vashem)

Although it is clear that the direct occupation of German, French and Italian forces played a huge role in the atrocities against North Africa’s Jews, this does not account for the extensive attempts at collaboration between Muslim leaders and the Nazis against their alleged “common enemies” of Communism, Zionism and the West.
Nor does it explain away the Nuremberg-worthy laws imposed on Jews after the collapse of Nazism, nor the fact that Mein Kampf remains a long-standing bestseller in Turkey, Bangladesh and Afghanistan.
Not to mention that Iraq’s pro-Nazi coup in 1941 occurred a full nine years after its independence from British adminstration. This coup culminated in the Farhud (lit. violent dispossession) pogrom of 1941, in which hundreds of Iraqi Jews were murdered, beaten and sexually assaulted thousands of miles away from the theatre of Nazi occupation and war — a tragedy that Israeli activist Hen Mazzig tirelessly works to raise awareness of, but one that was never mentioned in my over two decades in the British education system.
In failing to acknowledge the experiences of communities outside Europe and the complicity of non-western actors in the Holocaust, we fail to fully understand what was one of the most devastating and defining moments of the twentieth century, whose implications for the Jewish and non-Jewish world endure today. Although cooperation does seem to be growing in the wake of initiatives such as the Abraham Accords, the prevalence of grassroots antisemitism across the Muslim world is arguably the greatest barrier to peaceful coexistence between Israel and its neighbours.
Read article in full
The Holocaust was an Arab story too
Posted by bataween at Sunday, April 11, 2021