Once the handsomest synagogue in Tripoli, plans could be afoot to turn the Dar al Bishi synagogue into an Islamic centre. In a  JTA report based on one in the Italian-Jewish Moked, David Gerbi  of the World Organisation of Jews in Libya alleges that the synagogue is being taken over without permission. Gerbi broke into the synagogue in 2011 to pray, but was forced to leave Libya, where no Jews live anymore,  after threats on his life. If the synagogue becomes a mosque, it would not be the first. The shrine of Ezekiel at al-Kifl in Iraq was turned into a mosque without protest in the last five years. 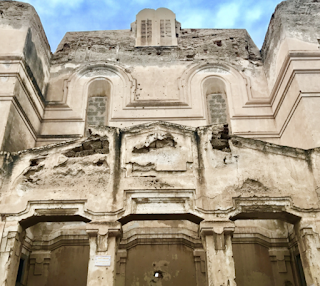 The Dar al Bishi synagogue
JTA — An abandoned and ancient synagogue in Libya is being turned into an Islamic religious center without permission, the World Organization of the Jews of Libya said. David Gerbi, a Libya-born Italian Jew, and member of the organization, which promotes the interests of people belonging to the Libyan Jewish Diaspora, wrote about the Sla Dar Bishi in Tripoli last week in a report published by Moked, a Jewish publication in Italy.
“Since there is now no Jew living in Tripoli and since the power is in the hands of the local authorities (read: militias) it was decided to violate our property and our history,” he wrote. “The plan clearly is to take advantage of the chaos and our absence.”
Gerbi said The World Organization of Jews in Libya “calls for this transformation to be stopped immediately and to leave the Tripoli synagogue intact with the hope that one day it will be restored.” Contacts on the ground provided Gerbi with pictures and videos over the past three months that have convinced him that the synagogue is being taken over illegally, he said. 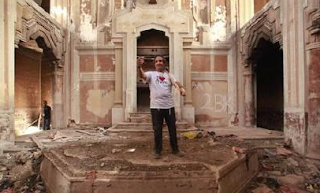 David Gerbi managed to pray in the synagogue in 2011 before being thrown out of Libya
Read article in full
More about David Gerbi
Posted by bataween at Sunday, April 18, 2021

Nice post, I really enjoyed reading this article, it explains everything in a simple way. I will check this blog for such important information and will continue to search for it.
Essential Oil Packaging Boxes