Following the decision of the highest court of appeal in France that the murderer of a French Jew of Tunisian origin should not stand trial, a huge protest demonstration is planned for Sunday in France and rallies have already been held in the US and Israel.  Meanwhile, Sarah Halimi's sister, Esther Lekover,  is calling for the murderer to be tried in Israel, the BBC reports. 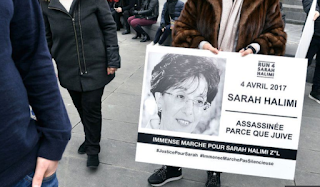 The sister of an Orthodox Jewish woman murdered in France in 2017 is to file a legal claim in Israel in the hope of getting a trial against the killer.
Kobili Traoré cannot stand trial in France after a court deemed he was not criminally responsible due to his mental state. He killed Sarah Halimi, 65, in what French courts have now accepted was an anti-Semitic attack. He chanted verses from the Quran as he attacked her inside her Paris flat.
He also chanted God is great in Arabic before throwing her over the balcony of the third-floor flat in the city's eastern Belleville area. Murder of Paris woman, 85, 'anti-Semitic' France warns of steep rise in anti-Semitism Mr Traoré, who was 27 at the time of the attack, is currently in a psychiatric hospital.
Israel's criminal law may apply to anti-Semitic crimes committed abroad that have been denounced by an Israeli citizen, in this case Ms Halimi's sister Esther Lekover.
However, France does not extradite its nationals. Ms Lekover's two lawyers "deplore being forced to expedite this procedure, but they cannot accept a denial of justice which offends reason and fairness far beyond the Jewish community of France", they said in a statement.
Read article in full
Halimi killer won't stand trial: 'a devastating blow'
Posted by bataween at Friday, April 23, 2021