The last Jew of Afghanistan is leaving for Israel

The writing seemed to have been on the wall - or rather off the wall -  in 2019, when  vandals tore up Zabulon Simantov's posters. He is going  to Israel out of fear of a return of the Taliban in Afghanistan. JTA report by Gabriel Friedman: 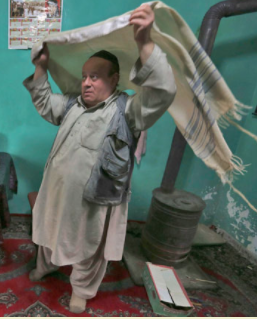 Zebulon Simantov says his morning prayers
(JTA) — The man who has been known as the last Jew in Afghanistan for well over a decade is leaving for Israel, fearing that the U.S. military’s promise to leave the country will leave a vacuum to be filled with radical groups such as the Taliban.
“I will watch on TV in Israel to find out what will happen in Afghanistan,” Zabulon Simantov told Arab News on Sunday.
Simantov, 61, said he will leave after this year’s High Holidays season in the fall. His wife, a Jew from Tajikistan, and their two daughters have lived in Israel since 1998.
But Simantov has stayed in his native Afghanistan to tend to its lone synagogue, located in the capital Kabul, through decades of violence and political turmoil, including a period of Taliban rule and the country’s war with the U.S.
“I managed to protect the synagogue of Kabul like a lion of Jews here,” he said to Arab News.
Read article in full
Posted by bataween at Tuesday, April 06, 2021