The Jewish women who married Arab men in Palestine

As many as 600 Jewish women could have married Arab men during the Mandate period in Palestine, according to Rabbi Hanania Dery, the chief rabbi of Jaffa. Dery, who died in 2002, made it his mission to track down these women and reconcile them with their families. Idith Erez, a graduate student at Haifa University, has researched the question. Feature article  in Haaretz by Ofer Aderet: 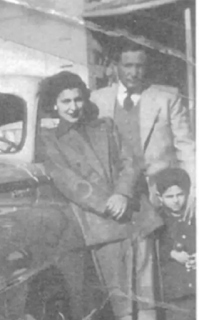 Kamal al-Hussein, seen here with his family. Al-Hussein, the commander of the Arab side against Joseph Trumpeldor at tel Hai in 1920, was said to have had an affiar with Sarah Abadi, a Jewish woman from Tiberias. In one of the interviews Dery gave, he noted that “many of the women who converted to Islam are from the Eastern [Mizrahi] communities. They know Arabic, and the Arabs’ way of life is not something that’s remote for them. Many come from large families that are on welfare. There are also intelligent girls among them who are looking for adventure.” Dery also mentioned other reasons for such relationships, among them “rebellion,” “defiance” and “principles.”
According to his obituary, in 2002: “He was never deterred by difficulties, and he persuaded Jewish families who were already sitting shiva for their daughters who had married Arabs, to take them back.” A particularly interesting case is recounted in a report sent by a Haganah man to the organization’s intelligence branch in 1942. His plan, cited in Erez’s study, was to recruit a young Jewish woman to spy on senior Arab leaders.
“I am thinking this week of getting in touch, to obtain information, with a Sephardi girl from Tiberias who has intimate relations with Kamal al-Hussein. He likes to waste a lot of money on her.” Abadi's fur coat Hussein entered the history books in 1920, as the leader of the attack on the Jewish settlement of Tel Hai, in Upper Galilee, in which Yosef Trumpeldor, an icon of the Zionist enterprise, was killed. Two decades later, he was having an extramarital affair with Berta Abadi, a Sephardi woman from the Old City of Tiberias.
Abadi managed the city’s Agam Cafés. Some contemporaneous sources claim that she had a “bad reputation” and that she ran a high-class brothel above the café. According to other sources, she was a “society woman” who hobnobbed with dignitaries from the Arab community in Tiberias at social events and soirees. A report of the Haganah’s intelligence service termed her a “modern prostitute” but offered no elaboration.
According to one of the Arab sources, far from hiding her relations with Hussein, Abadi flaunted publicly the gifts with which he plied her and strutted around the streets of Tiberias wearing a fur coat from him, even in the heat of the summer. Alongside her relationship with Hussein, whatever its character may have been, various sources note that she also had a romantic relationship with Ahmed Adora, leader of Najjada, a paramilitary youth movement that was active in the city.
In April 1948, following the battle for Tiberias, which ended with the victory of the Haganah and the evacuation of the city’s Arab population, Abadi disappeared. One account has it that she moved with Adora to Jordan, where she lived for a few months disguised as an Arab, until she was arrested on suspicion of espionage. According to another version, she went to Lebanon with Hussein, who was murdered there about a year later. In any event Abadi returned to Israel, married a Jewish man and raised a family. She died in 2000 at the age of 80 and is buried in Tiberias.
“Her history from April 1948 is vague,” researcher Erez says. “My attempt to contact members of her family, who still live in Tiberias, was unsuccessful. Oldtimers I spoke to there know Abadi’s story well, but were silent. Other than providing hints about a ‘problematic’ past, they were uncooperative.”
Erez discovered a number of stories about Jewish women of Mizrahi origin from Tiberias who maintained relationships of various kinds with Arabs from the surrounding area. Life together in a mixed city, where the two peoples interacted in cafés, markets and residential neighborhoods, occasioned contacts that crossed national and cultural borders.
Erez found that in Tiberias in the pre-state years, as in other communities in the periphery, the majority of the Jewish women who had relationships with Arabs were from the Sephardi communities, “whose way of life, language and customs point to the cultural proximity that existed between Jews and Arabs in the city,” she explains, adding, “Their close acquaintanceship with Arab culture and the Arab men was a natural and convenient basis for the ties that were formed.” Another reason some women of Mizrahi descent chose Arab men,
Erez notes, is that they were not attracted either to the “rough-hewn sabra” or the “European Jewish immigrant, foreign to their way of life.” Arabs, in contrast, shared a common language and social and cultural codes with these women, and were also “ardent suitors, persistent and polite.” Nonetheless, Erez discovered that not all of the Jewish women in relationships with Arab men on the eve of Israel’s establishment were Middle Eastern descent, or living in relatively remote communities.
Read article in full
Posted by bataween at Sunday, April 25, 2021