The forgotten (or ignored) tragedy of Tunisian Jewry

The Nazis occupied Tunisia for six months in 1942. They even imposed the yellow star in the town of Sfax. However, the impact of Nazism on Jews in North Africa has been forgotten, if it was ever known about, Haim Saadoun tells Israel Hayom: 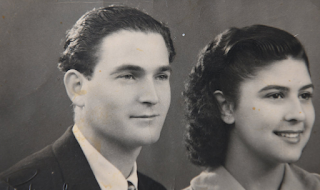 Yakov Saadoun and his wife Yvet, Haim Saadoun's parents
Occupying Tunisia was a response to these two military events. The goal was to place a buffer between the British forces that moved from Libya towards Tunisia and the US forces that were also moving there, but from Algeria."
The SS men that arrived in the North African country together with the German army were in charge of dealing with the local Jewish population, as usually happened. SS Commander Walter Rauff, who specialized in the extermination of Jews in Eastern Europe in mobile gas chambers, was in charge. Rauff and his men implemented a policy somewhat similar to that in Europe and established a Jewish community council through which they controlled the Jews.
"The Jewish community had to provide the Germans with at least 5,000 young men between the ages of 17-50, who were used for labor in the German army," Saadoun said.
"The Germans needed the workforce for various reasons, and some Jews were being held in labor camps. Some of these camps were situated at the front line of the war, and Jews there lived in tough conditions and had to do hard manual labor.
"There were 24 camps. We do not know how many Jews were there, but it was thousands. The Germans did not apply an exterminating policy in Tunisia. There were isolated cases of Jews being killed, but it was not systematic. Many did, however, die in the labor camps," Saadoun explained. "The 18-year-old Jews were sent to labor camps at airports that had been hit by American bombs," Saadoun's father, Yakov, wrote in his journal.
Jews were also sent to work at "the port and the train station. They had to do manual labor and wear a yellow badge to stand out against the French and other nationalities, like Italians, Greeks, and Maltese, etc. Many workers died as a result of their work, for they were bombed by the Americans or the Brits," he wrote.
"The Germans caught my father, a blond 14-year-old boy with blue eyes, [characteristics] that saved him because they thought he was not Jewish based on how he looked," Saadoun said. "My father wrote many letters that I keep, but he did not talk about the wartime a lot. I originally did not understand why it took him so long [to share his experience during the war,] but it turns out that it was very difficult for him to speak of that time. It was a kind of post-trauma."
"In some cities in Tunisia, Jews would walk around with yellow badges, for example, in Sfax. Their property would get confiscated by the Germans, so were Jewish buildings and valuable personal belongings, and more. That was the first time Tunisian Jews had to face such great difficulties. They never experienced anything like that before. They did not know how long it would last. It was a horrible time for them," Saadoun explained.
Read article in full
Posted by bataween at Wednesday, April 14, 2021