Passover is being openly celebrated in Bahrain and in the Gulf countries, where over 100 guests attended a seder in Dubai. Meanwhile, The Jerusalem Post reports, rabbis in the West have been tending to the religious needs of Jews in Muslim countries: 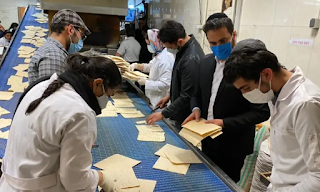 Matza production in Tehran
In Tehran, the matzah factory, which begins operating approximately three weeks before Passover begins, has been churning out several tons of machine-made matzah for the local community, overseen by Chief Rabbi of Tehran Rabbi Yehuda Gerami. There are approximately 12,000 Jews in Iran, mostly in Tehran but with communities also in Shiraz, Isfahan and beyond. In addition to the locally made matzah, some 250 kg. of “shmura matzah,” produced with greater stringency and by a more difficult process than regular matza, often used specifically on seder night, was imported into Iran from Azerbaijan.
And the Alliance of Rabbis in Islamic States (ARIS), an association of rabbis serving Jewish communities in 14 Muslim-majority countries, has been busy sending matzah to Jews in some of the most politically perilous places in the world, including Syria, Afghanistan, Libya and Lebanon.
In addition, the organization has sent several thousand seder boxes, including seder night essentials, to Jewish communities ahead of Passover, across the Muslim world, including Turkey, Azerbaijan, Uzbekistan, Nigeria, and beyond.
In Uzbekistan, Rabbi Shlomo Babaev from the capital city of Tashkent, prepared 560 bottles of wine for use at the seder and over Passover, and slaughtered 120 chickens brought to him by members of the Jewish community for consumption over the holiday.
“It is heartwarming to see how rabbis in Muslim countries are helping each other in providing logistics and assistance in transportation of matzah, to assure that every Jew is able to celebrate the holiday,” said chairman of the alliance Rabbi Mendy Chitrik.
“This year, the rabbis at the Alliance of Rabbis in Islamic States have provided Matzah and Pesach amenities to 14 ARIS member countries and to individuals in eight additional Muslim countries. The assistance of our governments in assuring that we can have our Passover religious needs cannot be overestimated.
” On the Arabian peninsula, the newly established Association of Gulf Jewish Communities imported some 300 kg. of matzot for local communities in the United Arab Emirates, Bahrain, Kuwait, and beyond. There are around 1,200 Jews living in the Gulf countries, the overwhelming majority of whom are expats from around the world but they also include 50 Jews in a community dating back some 140 years in Bahrain.
The Bahraini Jewish community also produced some locally made matzah as well.
Read article in full
Posted by bataween at Friday, April 02, 2021