Coinciding with Yom Hashoah, the Kedem Auction House in Jerusalem has published three out of six photographs in which the wartime Palestinian Mufti of Jerusalem inspects a Nazi labour camp together with foreign pro-Nazi leaders and Nazi government officials. Wolgang Schwanitz, author with Barry Rubin of Nazis, Islamists and the making of the modern Middle East , has managed to identify the individuals in the photos. Read his article in The Tablet (with thanks: Paul, Lily, Laurence):
Report on i24 News 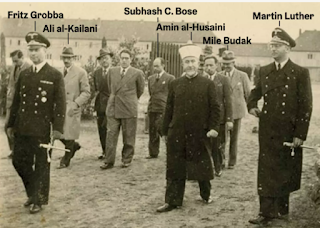 Mile Budak was the ideologue of Croatia’s ethno-radical, anti-Semitic Ustasha party, which ran a Nazi satellite state formed in 1941.
On the left is Dr. Fritz Grobba, a former envoy to Kabul, Baghdad, and Jidda. He was a Protestant and not a member of the Nazi Party. He had been in charge of the Middle East in the German Foreign Office since early 1942.
Grobba and the two Arab leaders pictured had supported the anti-British coup in Iraq, which was followed by the al-Farhud pogrom in mid-1941. In it, 179 Jews were killed and many stores looted. Masterminds like al-Kailani and al-Husseini wanted to signal, there in a 2,500-year-old community, how Arabia’s Jews should be treated. 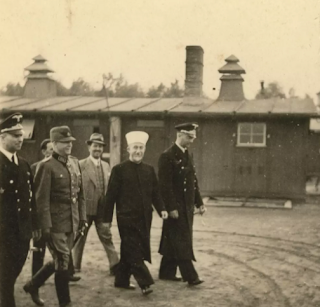 In the second photo (above) is the politician Arthur Seyss-Inquart, who presided over Hitler’s Anschluss of Austria in 1938 and two years later served as commissioner for the occupied Netherlands. In the process, he oversaw the deportation of 100,000 Jews to death camps and the enslavement of half a million Dutch people, half of whom were forced to go to Germany as slave laborers.
After the Nuremberg trials in 1946, Seyss-Inquart ended up on the gallows for his crimes against humanity. Budak shared this fate a year earlier in Zagreb, where he was hanged as a war criminal for his policy of sending Jews, Serbs, Sinti, and Roma to death camps.
On the other hand, both Arab leaders continued their anti-Jewish and Islamist policies unimpeded after the end of the war: al-Kailani until 1965 and al-Husseini until 1974.
Outside of Israel, Nazism had hardly been delegitimized in the Middle East, and its adherents often came to power after the war ended. The Iraqi al-Kailani staged a coup in Baghdad but failed. He was sentenced to death, then exiled to Beirut. Al-Husseini also found himself in Beirut, where he was active in the World Islamic Congress, which he founded in Jerusalem in 1931 (he opened a Berlin branch a year later). With robust backing, he rose to become the first “Global Grand Mufti.”
A mufti is a religious and legal authority who hands down rulings on everyday issues to believers in his jurisdiction. His late half-brother Kamil was the previous grand mufti of Jerusalem. Al-Husseini received the title in 1921, and in order to preserve and expand his transregional “Mideast-Europe” legacy after 1945, he chose as his representatives Said Ramadan for Europe, in Switzerland, and Yasser Arafat in the Middle East.
The Mufti advised Arafat in 1968 to take over the Palestine Liberation Organization (which he headed until 2004) and “to liberate Palestine,” operating out of Gaza with Fatah troops.
Read article in full
Posted by bataween at Monday, April 12, 2021