Jews from Egypt were surprised to discover that a newly-opened museum in old Cairo boasts two Torah scrolls  in a display case,  cheek-by-jowl with antiquities from ancient Egypt and the mummies of long-dead Pharaohs.
With much fanfare, the sarcophagi of 18 mummified Pharaohs and four ancient Egyptian queens were paraded in nitrogen capsules through the streets from Cairo's Tahrir square to their new home in the Museum of Egyptian Civilisation three miles away in Fustat, prior to its official opening on 3 April.
Egyptian President Abdelfattah al-Sisi attended the inauguration together with minister of Anitiquities, Khaled al-Fani. Also in attendance was Audrey Azoulay, director-general of UNESCO since 2016 and daughter of Andre Azoulay, the King of Morocco's Jewish adviser.
The Torah scrolls on display bear the symbol of the date palm. The date palm  is typically to be found on Torah scrolls in 20th century Cairo synagogues and is richly embroidered on a red or blue velvet case. The scrolls often bear a plaque indicating the name of the donor.
The provenance of the two scrolls cannot be identified. They may come from a storehouse run by the Egyptian ministry of Antiquities. Alternatively, they  may have been part of a stash of Judaica seized in 2014 which the Egyptian authorities claim was being smuggled out of the country.
While many Egyptian Jews applaud the presence of the Torah scrolls in an Egyptian museum as evidence of centuries of Jewish presence in the country, others are upset.  Rabbi Alouf of the Ahava ve'Avda Egyptian synagogue in Brooklyn, USA sent a message to  Magda Haroun, who heads the tiny Jewish community of Cairo, stating that the public display of the Torah scrolls was a Hiloul Hakodesh - a desecration of that which is holy.
In a letter sent to to Haroun in 2013, the Historical Society of Jews from Egypt,  chaired by Rabbi Shimon Alouf, had written that any comparison with the artefacts of ancient Egypt is false. Torah scrolls, artefacts, and prayer books can be used by living Jews and do not belong in museums, the letter argues.
The donor who gifted the scroll to a particular synagogue in memory of a departed relative might have intended to have his or her name preserved within a living Jewish community.
A 2017 report by the International Nebi Daniel Association, which aims to preserve Jewish heritage in Egypt,  identified 19 scrolls from Cairo synagogues that could be repaired. Together with the American Jewish Committee, Nebi Daniel recommended that the 19 scrolls be given on long-term loan to Jewish communities across the world. This would give them a new lease of life and 'contribute 'to underline the tolerant image of an Egypt respectlful of all religions'.
However, the Egyptian government considers that any Torah scroll more than 100 years old is an antiquity and part of Egypt's national heritage. This definition also extends to synagogues.
When the Nebi Daniel synagogue in Alexandria was restored  at a cost of four million dollars, minister Khaled el-Fani shocked diaspora Jews from Egypt when he announced to the media that the synagogue was now an Egyptian-Jewish heritage site similar to Pharaonic, Coptic and Islamic heritage sites. Although the synagogue rang out to the prayers of Egyptian Jews at their February 2021 dedication, it is clear that this was their swansong.
Levana Zamir of the Association of Jews from Egypt in Israel says that it is preferable for Egypt's synagogues to be considered heritage sites than 'community centres' for concerts and other cultural activities. 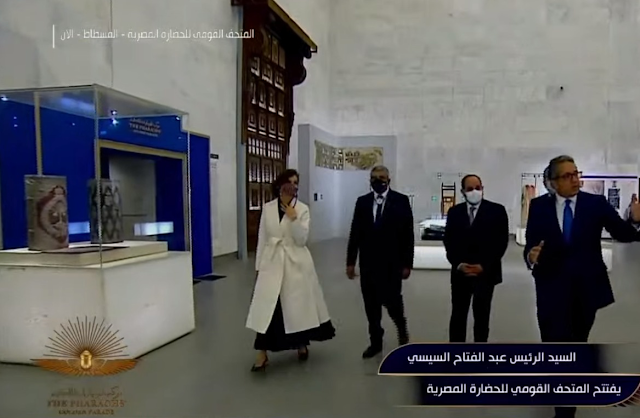