This year, hard on the heels of the signing of the Abraham Accords between Israel and Morocco, the Mimouna festival, which marks the end of Passover, will be extra-special in its celebration of Jewish-Muslim good neighbourliness. The Israeli and Moroccan embassies in Washington are hosting the first-ever joint Mimouna celebration in partnership with Sephardic Heritage International in Washington (SHIN-DC) and the Smithsonian Institution. The Jerusalem Post reports: 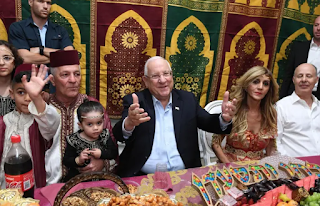 The holiday of Mimouna is a tradition among many North African Jewish communities, and is especially associated with Moroccan Jewry.
Held the day after Passover, the holiday marks the return to being able to eat leavened bread after it was forbidden throughout the weeklong holiday. “Occurring just before Holocaust Remembrance Day, Mimouna is a festival of good neighbors that encapsulates the spirit of the normalization of the Morocco-Israel relationship, as well as the establishment of diplomatic relations between Israel and other neighbors under the Abraham Accords,” Sephardic Heritage International director Afraim Katzir said in a statement.
“Mimouna not only marks the end of Passover, but is inspired by the Moroccan Jewish and interfaith narratives of unity, commemoration, goodwill and neighborliness," the statement said. "During Mimouna, Jewish families would open up their homes to each other and to non-Jews, who brought the leavened foods needed for a neighborly celebration.”
The celebration will also feature musical performances by Moroccan national and Washington resident Ismail Bouzidoune, who will play Gnawa religious music, and Moroccan-Israeli Mor Karbasi, who will play Andalusi music, on which flamenco is based.
The ceremony will be held live over Zoom on April 5, the day Mimouna is held outside of Israel. Registry for the event is free of charge, and can be done through the SHIN-DC website.
Read article in full
Virtual Mimouna to host famed Israeli artists (JPost)
For Mufleta recipe click here
More about Mimouna
Posted by bataween at Sunday, April 04, 2021