Descendants of families murdered in the 1948 riots in the northeastern Moroccan towns of Oujda and Jerada are set to ask the Israeli government to recognize those killed in the events as victims of terror. JNS News reports: 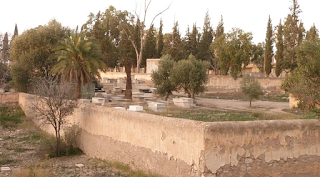 Abraham Cohen, a descendant of a family that lost 17 members to the attacks, said such a move would “correct a historic injustice that cries out to heaven.” Four Jews were killed when the riots broke out in Oujda on June 7, three weeks after Israel declared independence. They then spread to the adjacent city of Jerada.
Rioting there took the lives of 37 Jews, among them community Rabbi Moshe Cohen. Women and young children were among those killed. Dozens were wounded. Jewish stores were looted and homes were destroyed as Muslim women encouraged the acts, according to survivors’ testimony.
The riots were in response to the founding of the Jewish state and the underground activities of Moroccan Jews smuggling community members to the border with Algeria.
Located just two kilometers (1.2 miles) from the Algerian border, Ojeda was a base for smuggling Jews. In what was an open secret at the time, members of the underground would hide and smuggle Jews, raise funds and falsify identification cards, angering Muslim locals who felt a sense of solidarity with the Arab population in Palestine.
Read article in full
Remembering the Oujda massacre
Posted by bataween at Tuesday, April 13, 2021