Jews were never consulted about return of Iraqi archive

In the year in which the Iraqi-Jewish archive (IJA) is supposed to go back to Iraq, activists are fighting to keep it in the US. As part of her campaign, lawyer and academic Carole Basri, who descends from a prominent Iraqi-Jewish family,  has launched a film called 'Saving the Iraqi-Jewish Archives'. 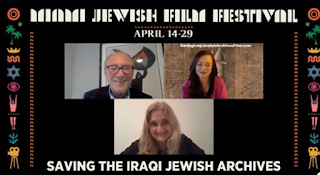 The film, which Carole directed with Adriana Davis, makes the case that the archive belongs to Iraqi Jews now in exile, and not to the Iraqi state. Some of the 20,000 documents and photos, correspondence and school reports  came from the Frank Iny school, the last Jewish school in Baghdad. Frank Iny was Carole Basri's grandfather.

Carole spent several months in Iraq immediately following the US invasion in 2003 and knew all the officials in the Coalition Provisional Authority run by Paul Bremer.

In a Q&A with Professor Henry Green, after a screening of the film at the Miami Jewish Film Festival, Carole Basri described how she  and other Jews was not consulted by the Bremer government when it signed  a commitment to return the archive to Iraq once restoration by the US National Archives in Texas had been completed.

She had little faith that the IJA might be properly preserved if it returned to Iraq, given that over 300 Torah scrolls were gathering dust in the basement of the Iraqi National Museum. The IJA is the last remaining link between descendants of the community and its 2,700-year history in Iraq.

The IJA was seized by Saddam Hussein's regime from a Baghdad synagogue in the 1970s and stored in the basement of the secret police headquarters. The collection was discovered in 2003 under four feet of water by Dr Harold Rhode after a US bomb damaged the building's water pipes, but failed to explode. It took ten years for the National Archives in Texas  to restore and digitise the archive. Highlights were exhibited at various Jewish centres and museums in the US and its stay extended several times after protests by Congressmen.

The US state department has stated that the collection will definitely return in 2021, although only three Jews still remain in Iraq.

You may view the film Saving the Iraqi-Jewish archives until 29 April.

Sign the Petition: Don't let the Jewish archive go back to Iraq