During the year that Ian Pokres spent in Morocco, he discovered that matters were not as 'nice' for Jews as they are made out to be. Take the case of 'Esther', a fellow student, ostracised for her desire to convert to Judaism. Morocco remains a deeply Sunni Muslim country and religious tolerance is limited. Read Ian's blog in the Times of Israel: 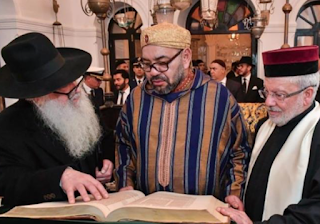 So, not knowing the bounds of the law, I told her I would show her where the active synagogue in Fes was. This synagogue is seldom known by even native Fesis, as people born in Fes are called. If you mention “the synagogue,” they think you mean the abandoned ones in the old Jewish quarter near the palace, the mellah. The King is turning those into museums for the benefit of tourism. Torah scrolls sit unused and misquoted on endless tours by legal guides and shysters alike.
What people often fondly dub the revivification of Jewish culture in Morocco is more accurately termed the mummification of something very much dead. At least in Fes, local Jews don’t want everyone knowing about their continued communal life.
My first time at the community center was a Friday evening. The seeming lady-in-charge told me I was welcome any time, but I shouldn’t invite Moroccans. An elderly member of the community I had the opportunity to briefly interview through a translator told me it is not safe for him to wear a yarmulke outside.
Even as a child, when Jews still populated the mellah, wearing a kippah was dangerous. Harassment was a given, and assault was likely, even if it wouldn’t cause great physical harm. I will say more about mellahs in a later post.
To come back to Esther, I decided it was worth transgressing the matron’s graciousness to help this struggling young lady out whom I knew had put herself in harm’s way already for the Jewish people. And I was right. I showed her the place, a tucked-away spot with a police guard that attracts many visiting Israelis every Shabbat, baruch Hashem.
Two of the women there, including the one who had helped me feel at ease, directed her to the acting Rabbi of Fes, a descendant of one of the famous rabbinic dynasties of Fes – I won’t say which. Within days, she had arranged daily Hebrew lessons with him, and unabashedly brought her materials – Hebrew and siddur lessons on paper printouts – to the “garden” at our language institute, where students congregate to study and chat.
Of course, she attracted attention. This was supposed to be an outpost of openness (I’m not naming names, but the institute accepts half its funds, and includes in its name a certain Western nation on which it models its teaching. Feel free to Google; I won’t lose any sleep over it.), but some things apparently push the limits too far.
One of my closest Moroccan friends, an otherwise sweet and open Fesiya, told me Esther’s behavior was weird and unacceptable, and she shouldn’t be doing it. Mind you this friend had herself stopped wearing her hijab and told me she no longer called herself a Muslim. But again, limits. Some things are just not touched in Moroccan society…this was a universal theme I heard from my young friends and acquaintances there, no matter their place on the religio-political spectrum. Go and ask for yourself if you don’t believe me.
Read article in full
Posted by bataween at Wednesday, April 28, 2021