In a first, Bahrain and Dubai commemorate the Shoah

For the first time, Bahrain held a Yom Hashoah commemoration in the synagogue in the capital Manama, led by Huda Nonoo, former Bahrain ambassador to the US. Both Bahrain and Dubai took part in the 'Yellow candle' project. A webinar is being held under the auspices of the Association of Gulf Jewish communities'. The Jerusalem Post reports: 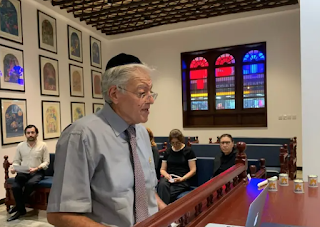 A Holocaust memorial ceremony was held in the Manama synagogue, Bahrain
For the first time in history, the Jewish community in Bahrain marked Holocaust Memorial day in a virtual ceremony initiated by “The House Of Ten Commandments.”
Only a few months after the signing of the Abraham Accords, of which Bahrain was one of the signatories, a memorable ceremony was held in a Jewish community synagogue that was recently renovated as part of an initiative by the King.
The ceremony was led by Ambassador Houda Nono, a member of a Jewish family who previously served as Bahrain's ambassador to the United States.
Read article in full
Posted by bataween at Thursday, April 08, 2021

Email ThisBlogThis!Share to TwitterShare to FacebookShare to Pinterest
Labels: Jews of Dubai and Gulf states, Jews of Bahrain