How refugees from Nazism were saved in Egypt

Tonight is the start of Yom Hashoah,  the Holocaust Memorial Day marked by Israel and Jews around the world on the anniversary of the Warsaw Ghetto uprising. It is a fitting occasion to focus on how fugitives from Nazism found refuge in parts of the Muslim world. 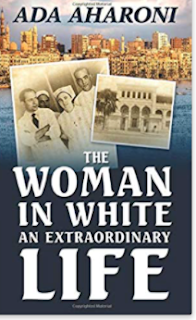 Professor Ada Aharoni in her book The Woman in White: an extraordinary life documents the exploits of Thea Woolf, a German-Jewish nurse who spent working 12 years at the Jewish Hospital in Alexandria, Egypt. Thea lost all family members who stayed behind in Germany.

The Jewish community of Egypt set up a Rescue Committee for Jews from the Holocaust in the 1930s and generously helped refugees with both medical care and money. Until June 1940,  a delegation from the Jewish hospital in Alexandria visited ships docking at Port Said. They were carrying Jewish refugees bound for Shanghai, one of the few destinations open to fleeing Jews. The committee obtained from the Egyptian authorities permission  to disembark the sick.

Thea Woolf also tells the story of how the hospital took under its wing Karl, a fugitive dancer from eastern Europe whose leg had to be amputated after a serious illness. The hospital set Karl up in an alternative career running a student boarding house.

In 1939, an Egyptian policeman arrived at the Jewish hospital in Alexandria. He had been sent to ask for help by an anxious German sailor on board a ship from Hamburg carrying 13 Jews seeking a haven from persecution in a Mediterranean port. But every time the ship docked, the Nazi captain locked the Jews in their cabins.

The sailor, Thea and the hospital director, Dr Katz, concocted a plan. If an epidemic broke out on a ship, the captain was obliged to tell the health authorities and allow a doctor on board. The doctor distributed sleeping pills to the 13 Jews. All fell into a deep coma and were taken into the Jewish hospital in Alexandria; the Nazi captain had no choice but to continue on his journey without them. The Jews took two months to recover from a coma and lung infections. They asked to go to Palestine and were taken to Port Said prison.

As the British would not allow Jews entry into Palestine, Thea and her colleagues had to think of another plan.  A fishing vessel carrying the Jewish refugees was hired to sail outside Egyptian waters, escorted by the hospital team on a police boat. Back in Alexandria, Thea heard nothing for a week, until she received the secret code, 'your aunt has arrived'.  But the refugees almost never made it. Off the Jaffa coast, a British coastal patrol had intercepted the fishing vessel. The refugees piled into a cutter, and despite rough seas, managed to row ashore.

It is important to note, Ada Aharoni reminds us,  that none of the refugees from Nazism could have been saved without the assistance of the Egyptian authorities and acts of compassion by individual Egyptian Muslims like the kindly policeman.

Email ThisBlogThis!Share to TwitterShare to FacebookShare to Pinterest
Labels: Books, Holocaust in Arab and Muslim lands, Jews of Egypt

Thank you Lyn Julius, for the review of my book: THE WOMAN IN WHITE AN EXTRAORDINARY LIFE. It is indeed important to make it known that the Jewish Hospital in Alexandria and the Jewish Community in Egypt, under the guidance of Thea Wolf, saved Jews from the European Nazi Holocaust.
Another historical fact which is quite unknown, is that this excellent Jewish Hospital was the hospital that served the Allied Forces under General Montgomery, who fought against the Nazi General Rommel, in El Alamein, near Alexandria. Thea invented a Blood Bank, and saved many wounded soldiers.