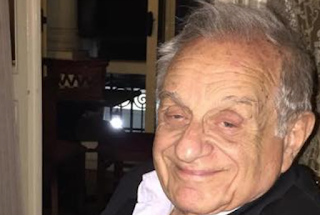 The oldest Jew in Egypt has died in Cairo, just short of his 91st birthday.
Albert Arie was born in 1930 into a middle class Jewish family. In spite of the mass exodus of 100,000 Jews, Arie turned down many opportunities to leave Egypt.
He was a Communist and served time from the 1950s in five jails. There he rubbled shoulders with the top leaders of the Muslim Brotherhood.
He appeared in the  2012 film by Amir Ramses, 'Jews of Egypt' , together with other Jewish communists.
Arie converted to Islam in the 1960s to marry a Muslim woman. His son, Sami Ibrahim, takes an active interest in the preservation of Egyptian-Jewish heritage.
Posted by bataween at Thursday, April 15, 2021