In July 1947, Eliahu Eliachar, founder of the World Sephardi Foundation and vice-president of the World Sephardi Federation sounded the alarm concerning the perilous situation of Jews in Arab lands. The main problem was the 'extremist Arab leadership', inciting an ignorant populace to violence against Jews, both in Palestine and in the 'Jewish 'ghettoes' in Arab lands, hostages to the Palestine problem. Eliachar  gave this must-read  testimony, unearthed by blogger Elder of Ziyon,  to  the UN Special Committee on Palestine (UNSCOP), held at the YMCA in Jerusalem, July 15, 1947.  What he told them could have influenced the plan to partition Palestine passed by the UN in November of that year. ( With thanks: Yisrael) 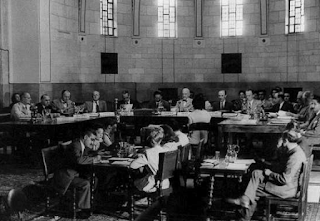 Eliachar gave his testimony to UNSCOP meeting in the YMCA, Jerusalem, in July 1947
Arab-Jewish relations were good in the social and economic fields. They traded freely together, they met socially, and Jewish schools were attended by the upper classes of the Arabs. I have myself studied with many of the present day Arab leaders in Palestine and abroad, and many are still my best friends. We were comrades in arms during the first war, and better friends it is difficult to find.
The Turks did not tolerate any disorder. Allow us, gentlemen, to stress this point with all our might. No disorder prevailed for centuries in this country. What is the cause? We leave it to you to consider. A special system granted foreign protection to certain Christians, Jews, and even Moslems. Without both these preventives, the Arab masses, who are generally of a peaceful character, are, due to their illiteracy and fanaticism, easily aroused to bloodshed.
Arab nationalism was non-existent, or at least dormant before the occupation of Palestine. The Balfour Declaration was accepted tacitly by the Arabs of Palestine. Only outside intriguers aroused opposition. The word of King Hussein and that of his son, Emir Feisal, was taken by the Arab world and the Arabs of Palestine at the time as the final law and the final word of law.
But gradually opposition was organised by the Christian-Moslem Association founded for this specific purpose in Palestine. The masses of the Arabs were inflated on religious grounds, which resulted in the terrible massacres of Jaffa, Hebron, Jerusalem, Safad, Mosca and so forth.
These massacres were perpetrated by the Arabs against their erstwhile friends, neighbours, partners. The Community of Hebron, the most ancient Jewish settlement in Palestine, was thus destroyed and evacuated. It remains so until today.
A town, a whole Jewish community in Jerusalem, which had existed for over eight or nine centuries without interruption, has been wiped out under British rule. [This refers to the Jewish community in Silwan/Kfar HaShiloach - EoZ.]Such a destruction could not have happened to the Jews under the Turks, particularly since the Government was aware that the Arab masses were being incited and encouraged by their leaders to believe that the Government supported these deeds. “Al Dole Maana” was the password in those days.
Many Arabs condemned these murders. Many have resumed their friendly relations with the Jews, but the fact remains that no longer can Jews inter-mingle freely in Arab towns and villages, even if they be of the Oriental Communities and of the oldest inhabitants.
On the strength of our experience of generations past and of recent events, we cannot visualize our dependence on an Arab State. Our bare lives will be in danger, and the fate of the Hebron Community may be ours too.
Without going into the causes which have brought the change of attitude, we cannot but deplore that present day Arab leadership is most extremist and most outspoken as to their intentions. No Jew can depend on the Mufti’s goodwill or that of his lieutenants. Using his religious position and prestige, he has been calling for massacres of the Jews ever since he fled to Germany. (…)
I was born a free man in Palestine. For over six hundred years, my family has resided here. All the time we realized one thing; that the Jewish problem, even as a Jew could see it — whether he lives in Washington, London, the Argentine, Palestine, or anywhere else — is totally different from what you will see for yourselves in one day in the D.P. Camps.
There is another thing which you have to see if you want to appreciate the problem that is facing you, that is demanding a solution. These are the ghettoes of the Arab States, of those independent, sovereign, democratic Members of the United Nations. The ghettoes in these Arab States, in the Yemen, in Iraq, in Damascus — if you will visit any of them, all the reports, all our speeches, all our proofs as to whether such and such a prophet was born on such and such a day, all that will have vanished and you will face the problem of humanity in the raw demanding a solution.
It is through you that we are in duty bound to sound the alarm, and call upon the human conscience of the world to take stock before it is too late. What has happened under the Nazi regime in the West may happen under the rule of certain Governments, Members of the United Nations Organization.
Many hundreds of thousands of Jews look up to you, Honourable Gentlemen, to prevent a repetition of massacres such as those in Baghdad under Rashid Ali, when hundreds were killed, or in Tripolitania under the British flag of occupation, where 120 men, women and children were brutally butchered. It is an open secret that the Arab League and the Arab Government consider the Jews in their realms as hostages for the Palestine problem.
They have declared this openly. If you require any evidence, we have the evidence with us. We do not want to take too much of your time, but if you want any evidence on these statements made by the Arab League, made by various governments, made by Dr. Jamali, the Foreign Minister of Iraq, we are ready to give them. Jew-hatred and Jew-baiting is growing daily in almost all Arab countries. What has happened once in Baghdad, Tripolitania, Urfa, the boundary of Syria and Turkey where a whole family was massacred overnight, in Egypt, what happened on 2nd November, 1945, Balfour Declaration Day, may happen again with increased violence.
Read report in full
Posted by bataween at Tuesday, April 27, 2021