Why was this Tunisian Jew stripped of his nationality ? 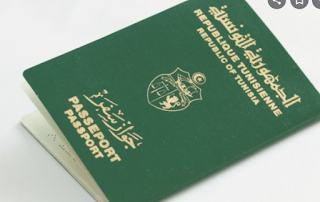 This is the Kafkaesque saga of a Tunisian Jew's attempt to renew his expired passport. Said Jew, let's call him Yaakov Cohen, had left his native city in the north of Tunisia some 40 years earlier for France.
As well as holding a Tunisian passport, he held French nationality by virtue of having married a Frenchwoman.
Unlike Iraq, where Jews were stripped of their nationality when they fled the country, or Egypt, where 40 percent of Jews were stateless anyway, Tunisia never confiscated passports from departing Jews.
As he was intending to travel to Tunisia to set up a heritage preservation project in Tunis,  Yaakov was advised go the city hall in order to renew the passport. He handed it over and requested from the clerk a duplicate copy of his birth certificate. But the certificate came back to him with the box marked 'nationality'  blank.
The same thing happened when he asked a clerk for copies of his parents' certificates of birth. And his grandparents'.  In every case, the box marked 'nationality' was blank.
It was the same story at the town hall of his native city. Yaakov asked to see the clerk's superior, and was shown into a large and well-appointed office. The woman in charge went through his documents and with a snide grin said that Yaakov would need to put in a formal request to a local judge to issue a nationality certificate.
At that point Yaakov lost his rag. He had been born in Tunisia, as were his parents and grandparents - who were buried just a few hundred feet away.
He had to appoint a lawyer to find two witnesses who knew Yaakov's father. The lawyer thought it would be a simple matter. Four months went by. The lawyer responded to Yaakov's  enquiries by sending him suras from the Koran.
The state could only strip a Tunisian of his nationality if he was serving a foreign power or if he had committed a crime. What was the motive in Yaakov's case? Was it antisemitism? Expulsion by stealth?
Yaakov has three theories. The first is that the authorities feared  the real reason for Yaakov's preservation project might be to recover seized Jewish property. (This is said to be the reason why the authorities in Egypt do not allow Jews to access their communal records).
In Tunisia, Yaakov had heard of similar cases to his own, but lacked firm evidence. An order may have  gone out not to re-issue passports to Jews who might want their abandoned property back.
The final explanation could be that when the authorities made the transition from paper to computer records, those who had not renewed their documents for years simply had their nationality omitted.
The question is, did this also happen to Tunisian Muslims who had long ago left the motherland?
Posted by bataween at Tuesday, March 23, 2021