US Jewry held back 'aliya'' from pre-independence Morocco

Between 1954 and 1956  Israel  was forced to put the brakes on its absorption of Moroccan Jews.  US Jewry, which had funded the 'emergency' aliya of Jews from Yemen, reduced its donations. In this paper, Avi Picard argues that US Jewish groups underestimated the dangers to Jews  from rising  violence, did not want to upset the French colonial authorities or encourage social instability. When Morocco became independent, Jews would not be allowed to emigrate legally to Israel for six years. 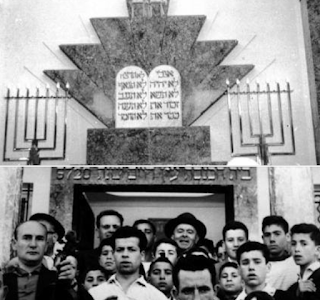 Mass Barmitzvah ceremony for needy children in Meknes, 1960
A dramatic change occurred in August 1954, when seven Jews were killed in the town of Petitjean. This event served as a catalyst for the increase of aliyah from Morocco.
Exacerbating the Jews’ sense of threat was the escalating Moroccan nationalists’ struggle and the French defeat at Dien Bien Phu in Vietnam (then Indo-China), which damaged France’s reputation as a powerful colonial power. Throughout the year following the Petitjean incident, violent attacks increased, culminating in August 1955.
The prevailing feeling among Moroccan Jewry was that of increasing precariousness. This concern was shared by Israeli and foreign officials, among them representatives of the American Jewish Joint Distribution Committee (known as the JDC).
As opposed to Algeria (where all the Jews had been granted French citizenship in 1870), and Tunisia (where 25 percent of the Jews held French citizenship), only 6 percent of Moroccan Jews were French citizens. The vast majority of Moroccan Jews, as Moroccan nationals, were not able to immigrate freely to France. Nonetheless, due to the widespread influence of French culture, numerous Moroccan Jews did have a good command of the French language, in particular those who were graduates of French-language educational institutions such as the Alliance Israélite Universelle (AIU). The connection to French culture facilitated integration into a wide variety of occupations and white-collar professions.
Yet many Moroccan Jews, mainly those who lived in villages in the Atlas Mountains and those of the older generation who lived in Jewish urban neighborhoods known as mellahs, had little or no exposure to European culture (though their children often did, especially if they attended an Alliance school). The majority of these Jews lived in great poverty.
Prior to 1954, difficult absorption conditions in Israel and economic development in Morocco discouraged Moroccan Jews from making aliyah; only Jews from the poorest parts of society were prone to leave the country. However, following the pogrom in Petitjean and a growing sense of insecurity, a considerable number of Jews—including those who were more established and more involved in French culture—applied for aliyah. Overall, aliyah applications among Moroccan (and Tunisian) Jews increased from 250 a month to between 5,000 and 6,000.
Read paper in full
More about the Petit-Jean massacre
More from Avi Picard
Posted by bataween at Monday, March 15, 2021