The mystery behind a Moroccan wedding photo

This is the story of how one Jew living in Paris came face to face with an unexpected evocation of her Moroccan past. Photos collected by Hannah Assouline are now on display at the Jewish Museum in Paris, but  one photo stands out.  See Academ video here of an interview with Hannah (with thanks: Vera): 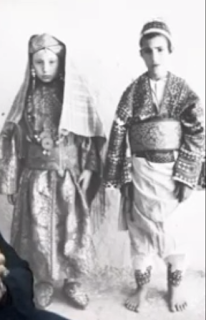 It was in 1985 that  Hannah Assouline, herself a photographer,  was introduced to the photographer Jean Besancenot. He lived in straitened means in a tawdry Paris apartment. Between 1934 and 1937, Besancenot went on assignment to photograph the inhabitants of the Atlas mountains in Morocco. Most of his Jewish portraits were  of women, and although poor, they wore the traditional dress reserved for festive occasions, weighed down with jewellery.

Besancenot immediately identified Hannah as a Jew, and could even tell which part of Morocco her family came from. They were dirt-poor and came from Tinghir, in the Berber Atlas mountains, where time had stood still for hundreds of years. Hannah was the daughter of a rabbi and the great niece of the famous rabbi Baba Salé, whose tomb has become a place of pilgrimage.

Sifting through piles of Besancenot's old photographs, Hannah came across a young bride and groom in their wedding costumes. The groom had a pained, even miserable expression. He was barefoot.

Hannah was struck by the boy's remarkable resemblance to her nephew. She bought the photo and presented it to her parents. Her father exclaimed in Arabic,'That's me!' The bride was his cousin Leila Sarah.

Was it really his wedding photo  - and how come did Besancenot choose to photograph him?

Jean Besancenot had actually asked to have a wedding couple pose for him, but the custom in that part of the world  was for girls to be betrothed at a very young age to much older men.

Bensancenot would have none of this - and called for a much younger groom. That's how Hanna's father was dragged out of a nearby yeshiva to pose for the camera. In fact it all happened so fast that the young man did not have time to put his babooj (slippers) on.

The reason for his pained expression was his embarrassment. A few months before he died, he asked   Hannah: with all the modern technology nowadays, can't you photoshop a pair of shoes for me?"

Email ThisBlogThis!Share to TwitterShare to FacebookShare to Pinterest
Labels: Jews of France, Jews of Morocco