Are we seeing a sea change in relations between Saudi Arabia and Israel? Saudi Tweeters have lately been digging a trench between themselves and the Palestinian cause, which has always tried to rally Muslim opinion to protect the Al-Aqsa mosque on Temple Mount. From the time of the Grand Mufti Haj Amin al-Husseini, Palestinian leaders have periodically claimed that the mosque has been threatened with  destruction  by the Jews.  Now Saudi users of Twitter are insisting on the primordial importance of Mecca and Medina to Islam. Although this line is not being promoted by the Saudi government, it is clear that the Tweeters are acting with its tacit approval. (With thanks:  Edna, Adrian) 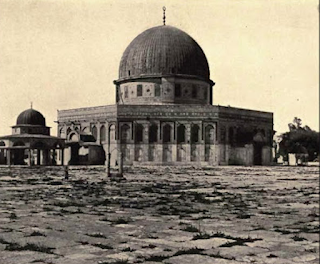 The Temple Mount, neglected and overgrown with weeds in the 1930s, before its protection became a rallying cry for the Palestinian cause.
Saudi Twitter users have recently been pushing a new line of thought that plays up the importance of Muslims praying towards the holy city of Mecca in Saudi Arabia, while downplaying the importance of the Al Aqsa mosque in Jerusalem, Israel National News(INN) reported Sunday.
The controversial campaign appears to be designed to push the message emphasizing the importance of the Saudi cities of Mecca and Medina as the holy places of Islam, and to eliminate the importance of Jerusalem and the Temple Mount for Muslims, thereby decreasing any Islamic authority the Palestinians have over the site.
One of the messages reportedly comes from well-known Saudi cartoonist Fahd al-Jabiri, who tweeted that “the direction of the prayers of the Jews is not important to us, what is important to us is only our homeland.