Saudi report: last Yemenite Jews are to be expelled (updated)

Update: The American Sephardi Federation has independently verified the report, and confirms that the Iranian-backed Houthis have indeed made refugees of 13 Yemenite Jews. There is no guarantee that Levi Salem Marhabi should be released from jail as a quid pro quo. Six other Jews remain in the country, according to the ASF.
According to a Saudi press report, the last remaining Jews in Yemen are to be expelled and are waiting for the UN refugee agency to find them a country other than Israel or the US which would grant them asylum. Last summer, a Jewish family arrived in Abu Dhabi from Amran province in Yemen and two more families followed in January 2021. The 13 Jews from three families to be expelled would have been living in a Sana'a compound, originally under government protection but at the mercy of the Iranian-backed Houthis since their takeover of the capital in 2014. The departure of the 13  is a condition for the release from jail of  Levi Salem Marhabi, following pressure from the US. The Jerusalem Post reports: 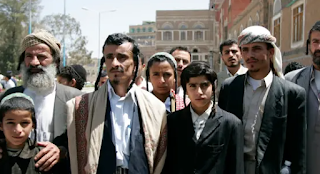 Some of the Jews living in the Sana'a compound
The last three Jewish families in Yemen were deported by the Iranian-backed Houthi rebels, leaving only four elderly Jews in the country, after heavy pressure by the Houthis, the London-based Saudi daily Asharq Al-Awsat reported over the weekend.
The families, totalling 13 people, told Asharq Al-Awsat that they were now searching for a new home. The families had resisted leaving their home, but finally agreed to leave after the Houthis made their departure a condition for the release of Levi Salem Marhabi, a Jew who was captured by the Houthis about six years ago.
“They gave us a choice between staying in the midst of harassment and keeping Salem a prisoner or leaving and having him released,” one of the deported Jews told Asharq Al-Awsat. "History will remember us as the last of Yemeni Jews who were still clinging to their homeland until the last moment."
Marhabi was arrested by the Houthis for helping a Yemeni Jewish family move an old Torah scroll out of the country. Despite a court ruling that he was innocent and should be released, he was reportedly held as a bargaining chip, according to the daily. Similar reports have been denied as false in the past.
In July of last year, Iranian-backed Houthis were said to be rounding up Yemeni Jews and pressuring them to leave, according to Egyptian reports.
The Israeli Foreign Ministry denied the reports, as did Yemeni and international sources.
Read article in full
Times of Israel
Posted by bataween at Monday, March 29, 2021

On 28 March 2021, the [[Iran|Iranian]]-backed [[Houthi movement|Houthi government]] deported all remaining Jews in Yemen except for 4 elderly community members who were too old or infirmed to be relocated https://m.jpost.com/diaspora/almost-all-remaining-jews-in-yemen-deported-saudi-media-663486